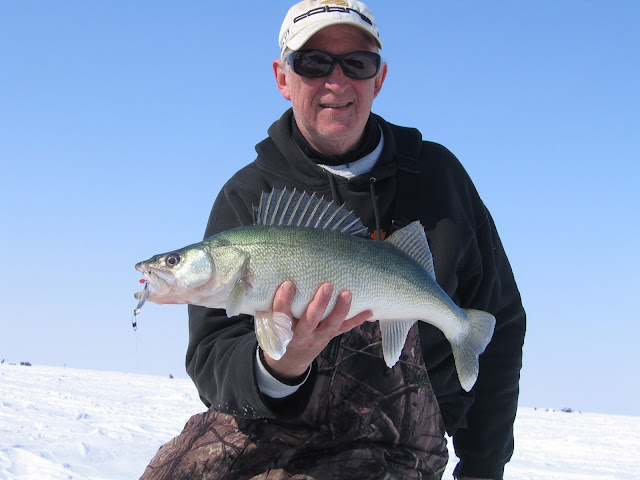 Perched on the back of Jim Price’s snowmobile, we headed out across the frozen surface of Lake Winnipeg for the last time this winter. It was Good Friday and half of Manitoba and North Dakota was on the lake with us. Seriously, as we unloaded the snowmobiles, a nonstop caravan of vehicles towing ATVs or snowmobiles was pouring onto the ice at Chalet Beach Road. By the time we headed out it was seven in the morning and despite the fog shrouding the lake, we could see that ice fisherman were scattered everywhere. We decided to start out near shore, but unfortunately the first place we stopped was a little too shallow and we only had about nine inches of water to fish.

We quickly moved out to three feet of water but after only one walleye in 20 minutes, it was time to head further down the lake to an area known as the Eaglenest. Between the four of us, we had two augers with long extensions but in this next stop, the snow was so deep, even with the extension we could not quite get through the ice.Grabbing a shovel, Jim cleared snow to the surface of the ice. Only then could we get through the ice to those walleyes waiting below. Quickly friend Dan MaCrae had three fish on the ice on a jigging spoon. Soon everyone in the group was catching fish with plenty of activity on our Hummingbird 55 Ice Flashers. In no time we had landed 14 walleye until we scattered the school a bit. These fish were caught on a variety of baits including jigging spoons and plain jigs.  I had good luck on a swimming jig, like the Lindy Slick Jig and the Lindy Techni- Glo Flyer. I just had a small salted shiner hooked on the back to add some scent.

Most of our fish were caught in less than five feet of water so using a lure that imparts action when moved is very effective on these fairly aggressive pre spawn walleye. None of the 30 walleye we landed this day were caught on a dead stick. The biggest fish of the day, which Jim caught, hit is Lucky Strike Red Flash Nickel spoon. Jim managed to coax this big fish off the bottom and the walleye smashed it just under the ice.

COMPLETE ANGLER NOTES:   Despite putting on sunscreen, I am suffering from a bit of sunburn today, a testament to just how dangerous it is at this time of year to not be protected.
After seeing the number of people out enjoying this great fishery on the Lake Winnipeg I have to wonder how much this ice fishery is worth to the province of Manitoba?