It was my first ice fishing trip of the new season and what a way to start off. I was with friend Jim Price and we were out on the southwest corner of Lake Winnipeg this past Wednesday. Jim had been out five days previous with some other friends with good results. So I was pumped when he pulled up to the spot near the Chalet Beach road. Permanent shacks were scattered over the frozen surface of Lake Winnipeg, a mini colony out in front of Matlock and another near where we were fishing. An ice ridge was restricting access to parts of the lake but it seemed to be also attracting some major schools of shiners, judging what I was to see on my electronics that day. Jim quickly drilled a series of holes, the ice being a solid two feet in most places. We then set up my six man Eskimo pop-up shelter which I had acquired in the fall.  Wow, what a pleasure it was fishing out of this unit, plenty of room and comfy warm with my sunflower heater taking off the edge. Jim opted to stay outside most of the time, moving from hole to hole to cover more area. It paid off for him early landing four of the first six walleye. I put on a late push to bring it close to even at the end of the day and I credit both the tent and Humminbird Ice 55 for that. It was because around 9 am we started marking a lot of fish up high in the water column along with clouds of baitfish.  As soon as I marked a fish in five or six feet of water under the ice, I would reel up my jig and minnow just past the mark. At first the fish would quickly disappear of the screen of my flasher when I did this. As the morning wore on though, the activity level increased dramatically, turning those spooked fish into biters. We would reel our jigs through the fish, stop just above the mark and jig one time. Wham! 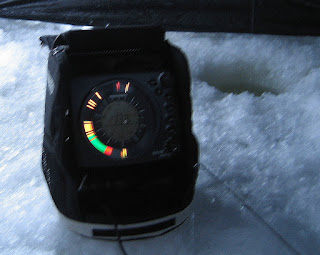 They were all nice walleye between 18 and 24 inches! I have fished Lake Winnipeg a lot over the last 15 years but have never seen so much bait fish under the ice. If this continues it should be another banner on year on the big lake!Two of Manitoba's most knowledgeable anglers when it comes to Lake Winnipeg are Roger Stearns and Lee Nolden.


I have had the opportunity to ice fish with both of these individuals and their insight on the fishery is as good as any I have ever heard. Stearns and Nolden both agree that when trying to find numbers of walleye, along with big walleye, clear water is preferred. Stearns says you can always catch walleye early in the season relating to perch, but numbers of fish are not as easily attainable until after the water clears up, usually after Christmas.
Here is Stearns' theory how the recent nutrient loading of the lake has affected the fishing in the south basin:
“Lake Winnipeg has an issue with phosphates and nitrates. Phosphates and nitrates happen to be the best friends of zooplankton and plankton. Plankton is also the preferred food for shiners and other minnows. Keep in mind that zooplankton and plankton have zero ability to move other than up and down to be in their preferred light level. They are totally at the mercy of the current which is a key point to remember.
Now go back in history about eight or 10 years when the people studying the lake figured out that the Hecla causeway was causing a huge back eddy in the south basin. The rotation of the back eddy is headed north up the middle with the help of the river and headed south down the west side. The east side is affected as well but more like a back draft and not as strongly.
Now that we have massive amounts of phosphates and nitrates and loads of plankton in combination with a back eddy the plankton just keeps going in circles and recharging with shiners. As it circles back out into the lake, picking up more and more shiners, it picks up walleyes. The back eddy pushes the plankton and minnows down the west side. The walleye follow the shiners down the west side, and to a lesser extent down the east side.
Plankton is lost in dirty water, not setting up in distinct pods like in clearer water. Plankton is always moving up and down in the water column to its preferred light level. The minnows follow that depth, which easily explains the abundance of suspended fish in the south basin.
Three and four winters ago the suspended bite was on fire for months, from 10 a.m. until 3 p.m. The perch bite was still there but could get super hot when the walleyes pushed the shiners closer to shore. In the month of March the shallow bite in particular can really heat up. This could also be in part because of the upcoming spawn and the peak of the migration.”
Stearns believes this will be an interesting ice-fishing season on Lake Winnipeg.  A lot of his consistent big fish spots are in deeper water five to eight kilometres out from shore. He believes that farther out will be better to get away from the flow and stained water.  Should be interesting to see how this ice fishing season pans out. It's off to great start!