The trip from Hell!

You roll the dice with the weather the last week in October in northern Saskatchewan. This year the weather and the fishing came up snake eyes. In four days of fishing Tobin Lake the temperature in this part of the world never got above minus three Celsius. Combine that with a brisk north wind all four days and you had wind chills in the minus 12 range. How cold was it? So cold that the front troll motor froze in place on more than one occasion! We were basically ice fishing out of a boat. The weather would have been bearable if the fishing had been spectacular but the for the second year in a row it was way below average. In the four days of fishing, the largest walleye landed was ten minutes into the trip on Day One. It was a beat up ten pounder that was missing scales on one side with serious lymphcoystis* on the other. While we caught some walleye each day and some fish in the eight to nine pound range, it was a fraction of what we had done in most previous falls. 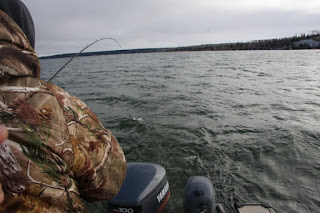 Friend Russ Heatherington, who has been fishing this run for 30 years, was not sure how to explain the lack of large fish. He did know though that no current in the river for the first three days of trip would make for a tough bite. Water quality can also be a factor and this year while not dirty it was not as clear as some trips.
We covered a lot of water the first three days with various crankbaits
but very few fish were caught using this method.

We did find a pod of good walleye Day 3 and ended catching 10 nice walleye on jigs towards the end of the day in 22 to 24 feet of water. Dead sticking was the ticket this day but on Day Four some movement of jig was required. Friend and Captain Boyd Holmen caught a number of nice walleye on the last day using a 3/8 ounce green jig tipped with a salted shiner. His advantage as Captain, was the front of the boat given wind conditions. 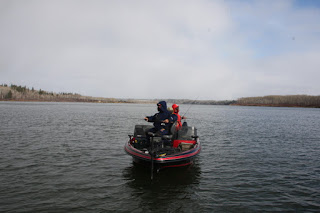 WHAT DO I MEAN BY THAT?

When the boat is pointed into the wind using the front troll motor, any change in wind direction or current will swing the back of the boat from side to side. If you happen to be fishing out of the back of the boat, this swing action means your line is also moving side to side and your jig with it. In cold water or in most conditions, this will NOT catch fish. Your line must be straight up and down to impart the correct triggering action on a tough bite. When the fish became a little more active on Day Four because of increased current flow, Boyd used a fairly aggressive lift and drop with his heavier jig. When he had a touch but no bite, he would hold the jig steady and wait for the fish to commit. This is a lot easier to do out the front of the boat because of the lack of bow movement given the fulcrum effect in place. The result, more fish in the boat.
Thanks to Perry and Susan, Dale, and Russ once again for their outstanding hospitality.

*Lymphocystis is a non lethal virus disease that can infect most fish. The Lymphocystis virus causes small white swellings on fins and bodies of infected fish. There is no cure for this disease but most fish recover from the disease by themselves.