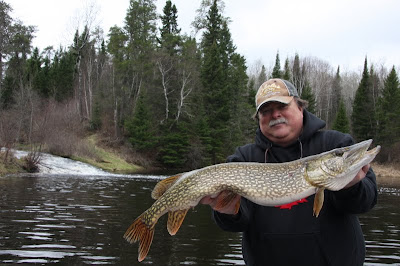 It was the second time I got a chance to fish with Mike Asher, an angler Canadian television fishing show host Dave Mercer called the best muskie and pike guide in Canada. On both early spring trips we were faced with conditions anglers hate, cold fronts with drops in surface water temperatures that turn fish off. Surprise, both times we had days that most anglers would talk about for years. On this most recent trip a week and a half ago, we were fishing Lake of the Woods, the second week in May. Last year, it was on Shoal Lake, Ontario about the same time of year. In both cases the surface water temperatures were in the low 50’s Fahrenheit or about seven Celsius in the back bays and about 47 Fahrenheit in the main lake. 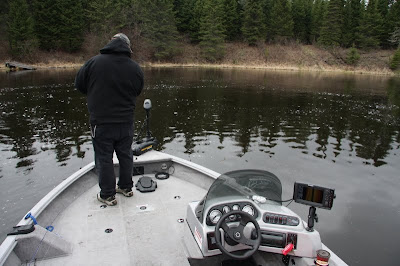 On our first stop, we started by fishing at the outer edge of a large bay with a feeder creek situated at the back end. Mike wanted to check if any of the large fish had moved out a little deeper because of a recent drop of surface water temperature. He was slow rolling a big white spinnerbait to search for active fish while I had cast out a Rapala X-Rap. Ten minutes later I switched over to a coffee flavoured Strike King soft plastic shad that look pretty close to a smelt, one of the prime food sources on this body of water. In no time I had on three fish, one a pike that was close to 40 inches. This fish came from a shoreline area that was wind protected, offering fish in the bay a little warmer water. Mike soon changed over to a yellow soft plastic jerk bait made by Berkley. We both started to consistently hook up small and medium sized fish. As we headed back into the bay a small stream was dumping warm water in a large pool that was deeper than the rest of the bay. As Mike carefully positioned his boat as to not spook any fish in the area, we made lo 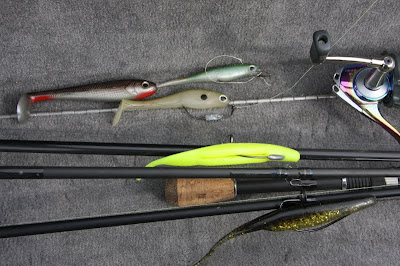 ng casts to the edges of the pool. Allowing our baits to sink, we would slowly twitch them back to the boat. I hooked up with another really good pike right at the side of the boat, a 41 inch beauty with a broad back and a healthy desire to get free. After two or three runs under the boat, Mike managed to get a grip on the fish for a quick picture and release. Mike, who has caught twelve pike at the magical 50 inch or longer mark, prefers not to use a net if at all possible. He believes that many nets on the mar 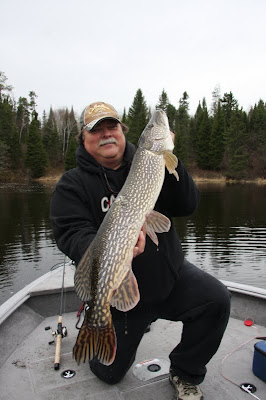 ket today leave welts on the fish, which can then become infected. While pike can be intimidating creatures for the average angler, once you learn how to deal with them, Mike believes hand landing in most cases is the way to go.
By the time we left the area, we had caught and released four fish in the 40 inch plus range, a pretty good day no matter what part of the world you fish in. As the day wore on, the temperature continued to drop. Almost all the shallow water fish we caught then were small males, as the larger fish moved out to deeper water to find a more stable temperature. Mike ended up catching a number of fish on a bone coloured Storm twitch bait that he worked 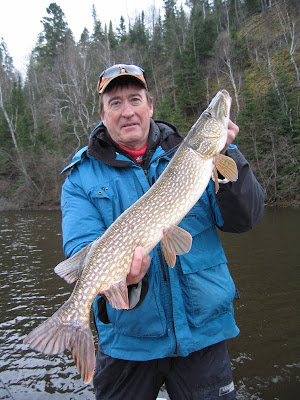 at the six to eight foot mark, a depth that was holding the majority of the pike. As we loaded the boat on the trailer we both knew that it had been a great way to start the open water fishing season.

For the story on our trip last year, go to the title Fishng with the Pike-Man!