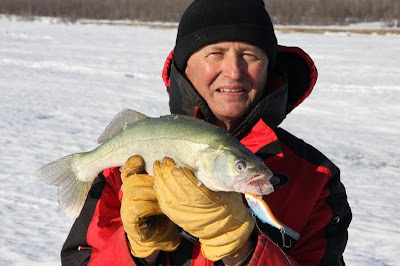 Huge chunks of ice littered the shoreline and dock at Balsam Harbour as we ventured down Road 100 on the east shore of Lake Winnipeg this past Thursday, March 24th.. As friend Pete Hiebert eased his truck on plowed road on the north side of the dock, water surged over the gunnels. This was big truck 4x4 territory and on this day only his huge Nokian studded snow tires were to save us from a fate a number of other anglers were to face this day; a truck buried in a snow drift with a foot of slush underneath. Twice on this day, we went to the rescue of those less fortunate, or not as well equipped. One truck we pulled out had a dad with a bad back and a son who was going in for heart surgery the next week. They had already been stuck for an hour when Pete arrived. Most of the anglers out on the bay this day though were still riding snowmachines, a wise choice. Keeping out of the major drifts we ventured north, stopping at a number of different spots to try our luck. Things were slow at our first stop so I got on the cell and called “Manitoba Walleye” Roger Stearns. Lo and behold, he was a short mile away from us with the television crew from “Next Bite” t.v.; lo 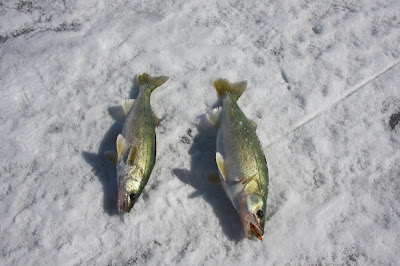 ng time acquaintances Gary Parsons and Keith Kavajecz . Life time pro anglers and tournament fisherman, we had shared some good times together many moons ago on both the Professional Walleye Trail and The Golden Walleye Classic up on Lesser Slave Lake. In fact I first meet them both at the inaugural PWT event held in 1989 at Mille Lacs in Minnesota. Al Lindner of In Fisherman fame, had invited Alex Kessler and myself to represent Canada at this huge event. While Alex finished in the top ten, I was able to put together a solid pattern the second day of the tournament that got me in the top third of the field. Parson and Kavajecz were making a name for themselves at this stage in their career with a number of tournament wins.
HIGH NOON ON LAKE WINNIPEG: As high noon rolled around we pulled the truck up a short distance to were they were fishing and I walked over to say Hi. It was great to see them again and we caught up on all the news from their part of the world. It turns out they were filming a couple of ice fishing segments, one to be aired on ‘Next Bite” and another on the newly resurrected “Bass Pro Shops Outdoor World. They had already caught a number of nice walleye for the cameras and with half a day to go, they were just hoping for a Manitoba Master Angler walleye to finish things off.
After lunch Pete and I continued to cover the lake, finding fish at almost every spot we stopped. Unfortunately once a couple fish were landed, one had to move on. The fish were scattered over a large area from 12 feet of water to 20 feet but when you marked a fish you caught it, one of the few days I can honestly say that the fish were that aggressive. All the fish were caught with an aggressive lift and drop. The number one bait was the blue and silver Koppers “Live Target” lipless crankbait. Second choice on this day was a perch “Chubby Darter” while Keith and Gary caught a lot of their fish on the Berkley “Rattlin Frenzy”. I have two boxes of these baits in all colours but according to Craig Ferens, another hard core ice angler, who is a member of WAAM (Walleye Anglers Association of Manitoba) the chartreuse has been his colour of choice on Lake Winnipeg this year.
We still have a week left in the season on the big lake, but I recomm 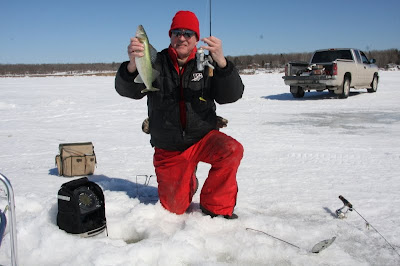 end that unless you have a big four by four half ton with aggressive snow tires and a partner truck to go with, use a snowmobile. The fish are starting to turn on and the weather forecast looks good!