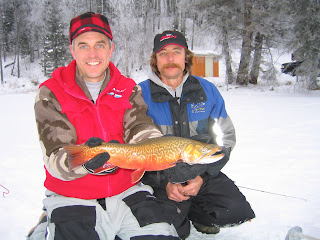 A shroud of ice fog enveloped the two vehicles in front of me, slowing progress on a early December morning.
A brief coffee at the Tim Horton’s in Dauphin at 5:30 a.m. had been the rallying point for an ice fishing expedition that had us heading west on Highway # 5 towards Roblin. I was joining Chip Leer along with guide Don “Sticky” Stokotelny on a filming expedition that was to cover almost a week in this part of Manitoba. Chip wanted a shot at catching the tiger trout of Twin Lakes, a fish he never knew existed before this trip. After seeing the photos and hearing the stories from “Sticky’ we decided it was a trip we had to make. The previous two days had been sent on Lake Dauphin catching walleye and pike but on this journey we were after something a little more exotic. 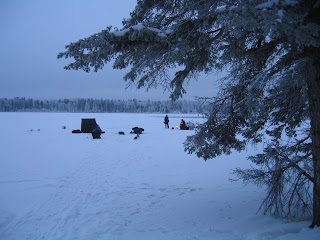 As we headed up Highway 83 after a brief stop in Roblin, the fog cleared somewhat. When we arrived at the lake some thirty minutes later we couldn’t help but admire the scenery. The same ice fog that had slowed our journey had shrouded the trees around us with a layer of white. All was still, the only noise a squirrel in the woods along with the soft purr of a generator pumping oxygen into the middle of the lake.
This was the key ingredient in keeping these valuable fish alive over the course
of a long Manitoba winter; aeration! In the blink of an eye we had our sleds unpacked, a short walk of only twenty metres to our fishing spot. With only a half metre of ice to contend with, it didn’t take long to punch a series of holes from one to five metres of water.
Chip had started his Coleman lantern, the light casting an eerie hue in the semi darkness. He was also the only one with electronics and before long, it started to light up like a Christmas tree! There’s one on the flasher now, he bellowed. A swing and a miss on that one and you could see the adrenal surging through his body. Mere seconds later another “blip” appeared on the screen, this time to engulf one of the tube jigs that “Sticky” had supplied for the gro 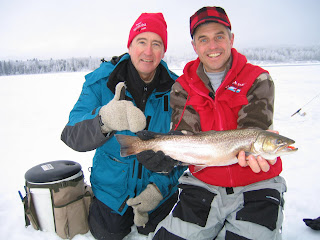 up. As the light started to filter through the trees, the action continued almost non stop. When I left just before lunch, a number of both female and brightly coloured male tiger trout had been caught and released. In fact these fish were so aggressive, that Sticky actually caught the same fish, a brightly coloured male with a slight dent in his kype, twice within ten minutes.

Now, that’s a fish with attitude!
These particular fish are a cross between brook and brown trout and are difficult to raise in the hatchery. Stocked six years ago, tiger trout have found Twin Lake to their liking, a huge population of scuds allowing them to grow to impressive size. We caught a variety of tigers this day from the more subtle browns and greens of the female fish to the bright oranges and reds of the males. The stripes on the side are what really set these fish apart as well as their attitude! On this particular day, the majority of the fish were caught tight to shore, in about one metre of water on small Berkley one inch power tube jig. Given the tenacity of t 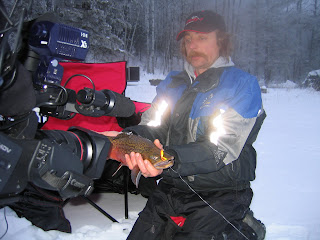 hese fish line test in the six pound test range was a definite advantage.
Don Stokotelny offers ice fishing packages and corporate trips out of his tackle store in Dauphin. In fact, if you are the adventuresome type you can spend a night on the ice in one of his heated portable shelters out on Lake Dauphin. Visit Don online at www.stickysbaitandtackle.com