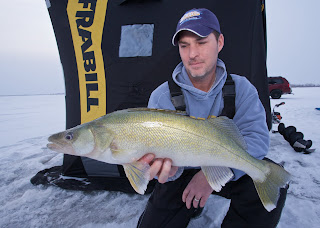 Big walleye are still being caught on Lake Winnipeg but anglers are covering more territory to find fish. According to veteran anglers who have been spending a lot of time on the big lake this winter, the key once again is to move around to you find schools of baitfish. Strong current flow from the Red River into the lake itself is still a key into finding numbers of the larger walleye. Anglers are finding a number of different patterns. Fishing last week, we found some of the walleye on shallow sand bars chasing shiner minnows with some perch thrown in for good luck. Later into the day we move out to some mud flats and got some eater sized greenbacks in the mud. And I mean in the mud! A number of the fish were spitting up mud on the floor of the portable. When you looked inside their mouth you could see it covered with Red River gumbo. These fish were obviously feeding on insect larvae, probably mayflies since the big lake has such a prolific hatch during early 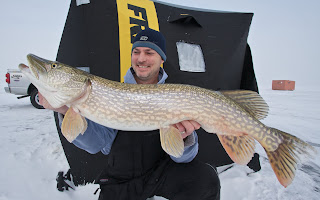 summer. Some anglers are also catching fish suspended in deeper water, in the eighteen to twenty foot range while some are keying in on the shallow bite in less than eight feet. What it means is that you are only limited by your imagination and time on the ice. Once again it pays to move around. If you are not marking baitfish and fish on your electronics move around. Access this year has been excellent with ice ridges to a minimum. The amount of pressure on the lake has risen dramatically because of this with anglers roaming all over the south basin.