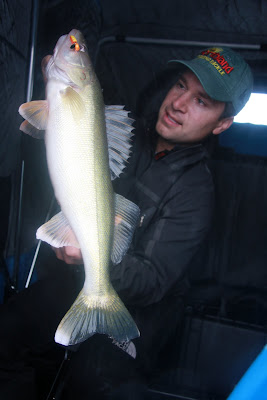 It was a relatively balmy morning when we hit the ice at Chalet Beach last week. It was the first ice fishing trip of the year on Lake Winnipeg and we were following Lee Nolden, a guy that spends almost every day on this lake in the winter. Lee took us along the shore towards the mouth of the river, some five kilometers. We had to dodge a few small pressure ridges but overall the drive was one of the best I can remember on this lake. Still you need four wheel drive, snow tires and another vehicle along with a tow rope just in case, at least if you want to be safe. We were quickly drilling holes in the dark, getting ready for the first light walleye bite. When the clock struck 8:30 the action got hot and heavy. I was fishing with Darrin Bohonis, the manufacturers rep for Humminbird/MinnKota. In no time Darrin had landed four fish. I managed one on a jig, then Darrin landed a couple more before we were forced to set up our portable tent. A nasty north wind had arrived, blowing right down the centre of this massive body of water. 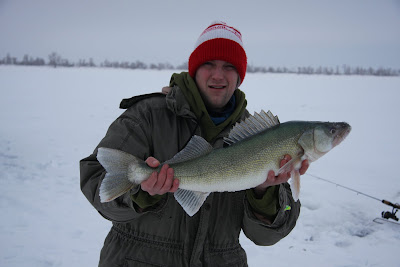 It also shut down the bite. Though we fished to four o’clock that afternoon it was only a scattered bite. We had been fishing eight feet of water, a depth were Lee has been finding the majority of the walleye this winter so far. We landed some walleye in the 26 inch range this trip and lost a couple more that might have been bigger. Nolden says the bigger walleye have been coming on the west side, though lots of walleye are being caught out of Balsam Bay on the east side of the lake.
He says, the bit has been relatively slow in other sections of the lake, including Hecla Island. Right now the lake has about 20 inches of ice. Hot lures have been the Live Target baits in silver and red though Darrin was using a silver and orange Rattlin Rap with good success. Jigs and jigging spoons also produced some fish.