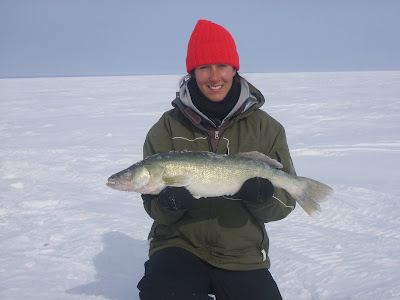 The ice fishing is in full swing with a spell of very cold weather. Anglers are always looking for information, especially at this time of year when everyone is just starting to get out on the lakes and rivers in Manitoba. Lake Winnipeg has been a primary hotspot of ice anglers for about six years now. Two of Manitoba’s most knowledgeable are Roger Stearns and Lee Nolden. I have had the opportunity to ice fish with both of these individuals and their insight on the fishery is as good as any I have ever heard.
LAKE WINNIPEG
Stearns and Nolden both agree that when trying to find numbers of walleye, along with big walleye, clear water is preferred. Stearns says can always catch walleye early in the season relating to perch, but numbers of fish are not as easily attainable until after the water clears up, usually after Christmas.
Here is Stearns theory how the recent nutrient loading of the lake has affected the fishing in the south basin:
“Lake Winnipeg has an issue with phosphates and nitrates. Phosphates and nitrates happen to be the best friends of zooplankton and plankton. Plankton is also the preferred food for shiners and other minnows. Keep in mind that zooplankton and plankton have zero ability to move other than up and down to be in their preferred light level. They are totally at the mercy of the current which is a key point to remember. 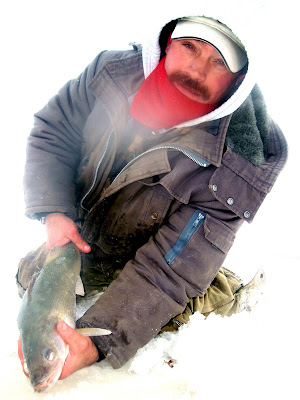 Now go back in history about 8 or 10 years when the people studying the lake figured out that the Hecla causeway was causing a huge back eddy in the south basin. The rotation of the back eddy is headed north up the middle with the help of the river and headed south down the west side. The east side is affected as well but more like a back draft and not as strongly.
Now that we have massive amounts of phosphates and nitrates and loads of plankton in combination with a back eddy the plankton just keeps going in circles and recharging with shiners. As it circles back out into the lake picking up more and more shiners it picks up walleyes. The back eddy pushes the plankton and minnows down the west side. The walleye follow the shiners down the west side, and to a lesser extent down the east side.
Plankton is lost in dirty water, not setting up in distinct pods like in clearer water. Plankton is always moving up and down in the water column to its preferred light level. The minnows follow that depth, which easily explains the abundance of suspended fish in the south basin. Three and four winters ago the suspended bite was on fire for months, from 10am until 3pm. The perch bite was still there but could get super hot when the walleyes pushed the shiners closer to shore. In the month of March the shallow bite in particular can really heat up. This could also be in part because of the upcoming spawn and the peak of the migration.

Stearns believes this will be an interesting ice fishing season on Lake Winnipeg because of the heavy current flow coming out of the mouth of the Red River. A lot of his consistent big fish spots are in deeper water five to eight kilometers out from shore. He believes that further out will be better to get away from the flow and heavily stained water. He also believes the east side will be the best producer for numbers of fish. This because it is less affected by water coming out of the Red River. Despite poor ice conditions most experts are predicting another exciting year for ice anglers on Lake Winnipeg 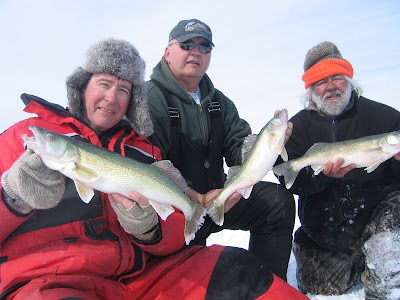 Anglers Notes: Manitobans have selected Jake Macdonald's novel Juliana and the Medicine Fish as this year's featured book for On the Same Page, a province wide reading initiative. First published in 1997, this is a book for all ages by a tremendous Manitoba writer. It's a coming of age story about a girl dealing with her parents' divorce and the turmoil that it creates in her life. Juliana's dad owns a fishing lodge which is in financial difficulties. If she helps her dad win a fishing derby by catching an enormous and elusive fish all might be saved. When the fish is finally caught, she must decide what is more important, protecting the last of a mythic species- or saving her father's livelihood. On the Same Page may be considered a province wide book club but the concept is to promote discussion that reaches into all communities, showing the power books have to unite people. During January and February, the Millennium Library will feature Jakes book along with a number if fishing exhibits that promote the sport.