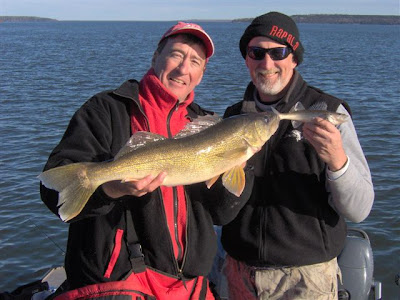 As the weather had cleared overnight, there was a considerable frost in the morning on all of our boats. The thermometer had dropped to minus eleven celsius but there was not a breath of wind.
Our Captain had decided that we should head out to the big lake, some fourteen miles from the resort to check out the walleyes. A couple weeks previous, they had caught a number of nice fish using bottom bouncers and spinners in twenty two feet of water. We waited until about 10 a.m to make the long drive, the sun driving up the temperature quickly, making the drive managable. As we pulled up to spot 057 on Boyds GPS all hell broke loose immediately.

Jims spinner rig, tipped with a shiner minnow, had barely hit bottom when his rod bent over. Boyd was not far behind, landing a chunky five pound walleye. I then had on two nice pike in the ten pound range, fish that pulled and jumped all over the place, an indication of how active the fish were. 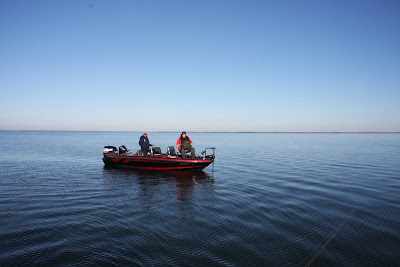 Unfortuntely for us, after this initial activity, things slowed down and around two pm we decided to head back to the mouth of the river, some eighteen miles west. Dale and Russ were in Dales's beautiful Ranger. They had decided to head back an hour earlier than we did. As we turned a corner of the reservoir, a southwest wind had been piling up some good waves. Slowing down, Boyd trimmed the nose of the boat down, pulling back on the throttle. That sure made it a lot easier on my old arthritic back and half an hour later we were back in the mouth of the river. And it was a wise decision as we immediately we started to catch walleye drifting a jig in twenty two feet of water. I had tied on a white and pink glow jig in 3/8 ounce, tipped with a shiner minnow. I quickly landed a number of good solid fish. The rest of our boat quickly switched over and the bite was on. As the sun started to dissappear behind the trees along the shoreline, we put away our jigging rods for nine and and ten foot trolling rods and line counter level wind reels. I put on a Bomber Long A with eight five feet of line out. Wham, in five minutes a six pound walleye slammed the lure. Jim quickly switched over to a Bomber as well, this one a pretty purple rainbow colour. Five minutes later another nice fish was on! 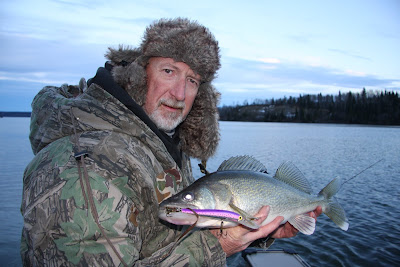 Later, as we headed back to the resort, a brilliant night sky full of stars ended up telling us a story. Jim Price pointed out the twin star Betelgeuse
shining brighly in the northwest, just off the tail of the Big Dipper but closer to the horizon.
Jim recounted the history of this mega giant. As he did both Boyd and I thought he was pulling our leg, because the brilliant greens and reds this giant was emitting made us think of an airplane. As we sat there in the dark for another ten minutes, we realized this "airplane" had not moved. What a sight it was, something a city boy had never seen.
Check it out for yourself at http://en.wikipedia.org/wiki/Betelgeuse
Next: Day Three at Tobin is big fish day! 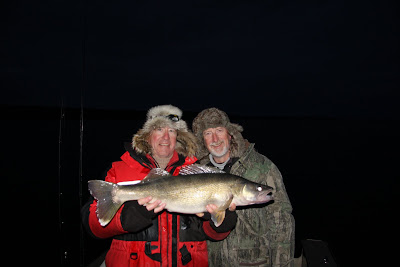