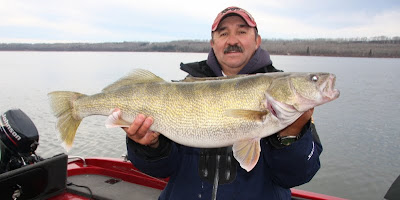 THE FISH OF A LIFETIME! AGAIN!!

As dawn broke on Day Three, the thermometer on Dales Cabin showed a balmy minus one Celsius. Everyone had gone to bed early the night before even though it had been Halloween and it was a very excited crew that hit the water that morning. Conditions were prime and three days of stable weather would only improve the bite. Since it was a Monday, Saskatchewan Power was running a bit more water through the dam at Nipawin. That is a good thing, because current on this system triggers an intense walleye bite.We were also pretty confident we had found the pattern that would consistently catch us both numbers of walleye with some trophies thrown in. What transpired shortly after lunch though, was past our wildest expectations. Boyd, Jim and I, along with Russ and Dale in the Ranger, started at the mouth of the river as it enters the reservoir. While we caught eighteen walleye on our first drift with jigs, none was bigger than nine pounds. A second drift around the corner produced only eight walleye. This was enough to convince Dale and Russ to move up one river bend, about a half mile away. A little later we were to join them on that stretch of water. It was on this stretch in 2003, while fishing with Russ and Dale, that a walleye that weighed fifteen pounds, three ounces was caught while cranking at night. Who was to know that this mark was to be shattered by the man who caught this fish. Thats right, Russ had taken our advice and tied on a big pink jig tipped with a shiner minnow. Dale was 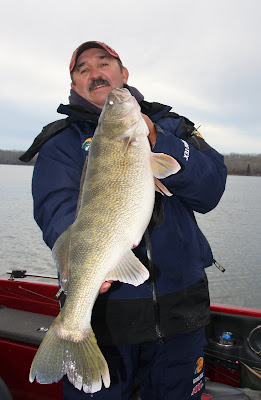 working the front troll motor up the side of the channel when a monster walleye slammed the pink jig. After a tug of war that last almost ten minutes, Dale was able to get the net under this behometh. Both Dale and Boyd carry digital scales in their boats for moments like this. With so many big walleye available on this stretch of river, they want to make sure they get the weights of these fish correct. After a careful weighing, Russ had done it again, another walleye over fifteen pounds!


This one tipped the scales at 15 pounds 8 ounces, beating his old record by five ounces.


After a few quick pictures this incredible fish wa 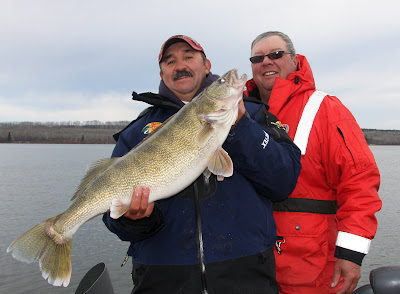 s released to live another day and the celebration was about to begin.