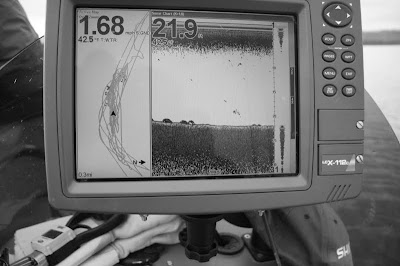 There was no frost on the boats when we got up at seven the next morning. All of us were hoping another monster walleye would be caught by the group on our last day. The weather continued just to get better and a high of plus 13 celsius was forecast. Don't forget this was the second day of November and we were a long way up the eastern side of Saskatchewan. As Boyd cruised into the mouth of the river, we noticed a ton of walleye showing up on his sonar. Quickly motoring back to check these fish out we continued to mark a huge school of fish extending out into the lake itself. Dropping our jigs down and drifting with the current in twenty feet of water, we caught one walleye after another. Unfortunately most were small fish, less than eighteen inches. 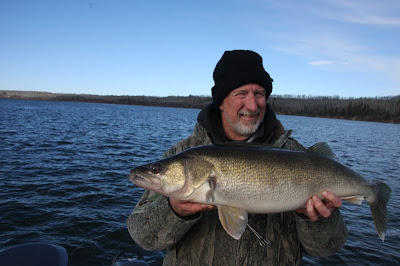 Well at least we had found some good eating size walleye but we figured we should work the stretch were the big walleye had been caught the day before. As it turned out, it was a wise decision. 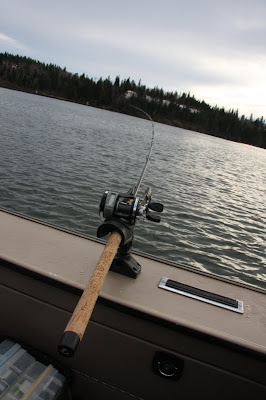 Boyd had us on a slow drift in anywhere from twenty to thirty feet of water. A short time later Jim hooked into his biggest walleye of the trip, weighing an even twelve pounds.

Ten minutes later Boyd landed one over eleven pounds. In a one hour stretch I landed five walleye over eight pounds, four or which were over nine pounds but none made the ten pound mark.
It turned out to be our best day ever, with more than sixty walleyes caught and released. At the end of the day, we decided to troll out in the lake and it again paid dividends with Boyd catching our last fish of the trip....of course it weighed an even twelve pounds and tied Jim for that days big fish. 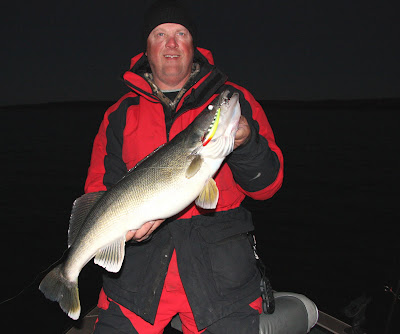