The year was 2006, and I was on my first visit to Aikens Lake Lodge as part of the first ever Catch, Picture and Release event on the Professional Walleye Trail. What a week it was as I met celebrities like Les Stroud of Surviorman. 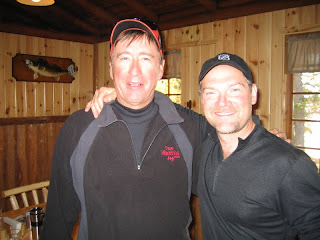 DON AND LES AT THE PWT EVENT IN 2006
My pro angler, Andy Kuffer, was just a blast to fish with, one of ten PWT qualifiers for this event 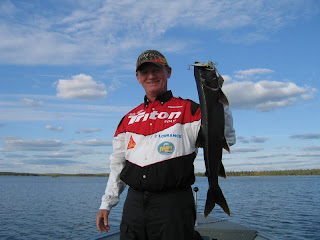 Despite all of that, it was the hospitality and fishing surrounding Aikens Lake that impressed me the most. On a trip this past week back to Aikens as part of a fundraising event for the Grace Hospital, I once again experienced all those touches that make such trips memorable; a warm greeting on the dock by the staff, excellent accommodation, top notch equipment, knowledgeable guides and of course the outstanding fishing. As Norm, Dale, John and I settled into our cabin our guides already had the boats packed and ready to go on Day one of our three day trip. Dale and Norm, owners of Allco Electrical Ltd had purchased the trip at the fundraiser in the winter. Both were experienced anglers which helped considering the number of fish that we had to catch over the length of the trip. No other fly in lodge that I have been to in my thirty years of fishing professionally had the quality of equipment Aikens did. We fished out of sixteen foot Lund Alaskans equipped with top notch Humminbird electronics, livewells, swivel cushioned seats, back troll motors and brand new 50 h.p. Yamaha motors. This boats were flown in especially for the PWT event and have held the lodge in good stead ever since. 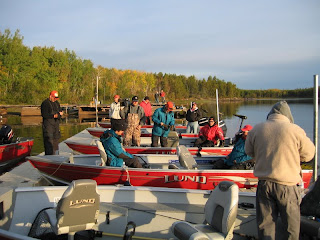 DAY ONE
I got to fish with friend John Toone, one of the organizers of the trip on the first day and what a day it was! We almost got tired of catching walleye in the twenty to twenty five inch range with John landing one just short of Master Angler length. It measured out at 27 ¼ inches, just shy of the 28 inches needed to qualify. Our guide Dave kept us on two spots all day, both off of main lake reefs. We fished in the twenty seve 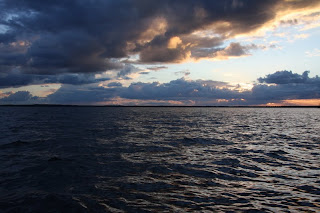 n to thirty foot range, targeting basin walleye that were after open water forage. A south wind was blowing baitfish on these spots and Dave kept us on the fish by backtrolling into the wind. His use of marker buoys along with electronics were also key, never mind the wave wackers that kept him relatively dry. The walleye on this day were pretty particular how they wanted the bait. We tied our jigs off the front of the eye, in order to provide a swimming action. John also rigged the dead shiner minnows we were using a bit different than I was and it proved very effective. He would tak 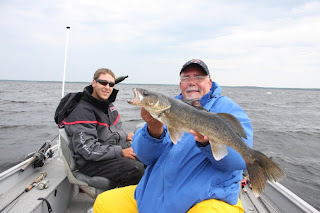 e the hook down through the head of the minnow just behind the hard plate, and angle it toward the mouth. Once through, he would turn it over and go straight
JOHN TOONE WITH AN ALMOST MASTER
through the front of the belly and straight out the back. While it looked a little awkward, in the water it had the appearance of a minnow swimming down to the bottom. It worked in spades, at one point he caught ten walleye in a row. I imagine I will hear about that for a few years to come! After coming back to the lodge, we got ready for supper, then an evening of pool at Big Mollys Bar. Here you get to trade information along with the big fish stories
DAY TWO: We traded boat partners each day and on the second day Dale was along for the ride. Overall it was a slower fishing day though we tried some different techniques including trolling crankbaits behind bottom bouncers in the deeper water. A severe lightning storm curtailed our afternoon fishing. As a result I took Dale out in the evening with a visit to the “Honey Hole” then a quick trip out to the first point. While we caught a bunch of walleye, none were over twenty inches. Still, it was a beautiful evening, a great way to end the day.
DAY THREE: With an excellent nights sleep in a comfortable bed, I switched guides and partners once again. Kik was an enthusiastic young man, who was going to university in Quebec City to become a luthier*. It was his sixth year as a guide at Aikens, having started in the sawmill on the property, fixing and building new cabins. While K 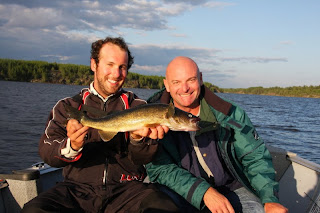 ik might be good with wood he was also a tremendous guide, one of the best I have had in my thirty years on the water. He was hard working, knowledgeable and funny! In fact, the shore lunch we had this day was one of the best I can ever remember from a humour standpoint. Heavy wind and rain in the afternoon slowed the walleye bite for us

KIK AND NORM THE LAST NIGHT
but we went back out once again in the evening for a couple of hours. The total that evening was Norm 15 walleyes, Don 14 walleyes and Kik thirteen fish, a spectacular way to end the trip.
SUMMARY: Aikens Lake Lodge is a quick fly in from Silver Falls by Bluewater Aviation float plane. In total it takes less than two hours to get to the lodge from Winnipeg. Pit Tureene and his wife Julie manage this facility and do a great job. Both are young and energetic with three young children to keep things interesting. They are one of a new wave of lodge owners that have adjusted to the changing world economy. Over the last two years, Pit has seen more and more Canadians come to Aikens and for the first time this year sixty percent of the clientele is Canadian. 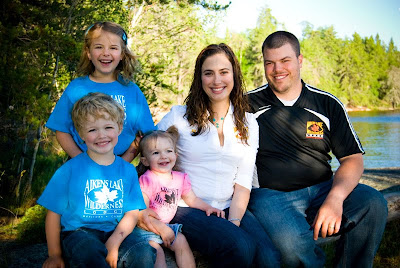 Pit is also in his second year as the President of the Manitoba Lodge and Outfitters Association, a testament to his respect in the industry. Visit them online at http://www.aikenslake.com/
* Luthier: Definition: a craftsman who makes stringed instruments such as lutes, guitars or violins.