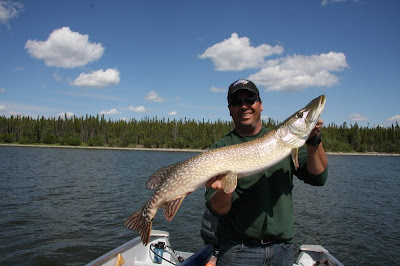 Jerry Dunlop’s dream was to own a fishing lodge one day. He started out as a guide at various lodges across the north, learning the business and keeping his eyes and ears open. One day he heard about a lodge that had come up for sale through receivership. After doing some investigating, he found out the good news, it was a lodge that he could afford. Then came the bad news, the lodge was in total disrepair, junk strewn everywhere and bears living in some of the cabins. Luckily, Jerry was still a young man, up to the challenge, with his dream laid out before him.
With the support of his wife Colette, Jerry and friends hauled away bush and junk, working from dawn to dusk to try and ready the lodge one day for guests. It has been six years since the work started and while there is more to do, Dunlop’s Fishing Lodge on Lake Waskaiowaka has hit the big time. More than 260 guests will pass through the doors of his lodge this year. In his first year of operation he had thirty. I first meet Jerry when I was working for Travel Manitoba at an All Canada Outdoor Show in Chicago. Jerry was working his booth, trying to attract more people to visit his fly in operation. For me, it was a chance to get to know this energetic young lodge owner and learn about his dreams and aspirations.
What I heard convinced me that he was on the right track, despite an economy that was in a tailspin, with American anglers willing to come north on the decline. So what has made Jerry Dunlop such a success? How about hard work, honesty, great attention to detail and knowing how to make a guest happy when they finally arrive at his camp. I found this all out first hand last week as Hooked Magazine publisher Steven Wintemute and I hosted a trip to this lodge through an auction held at this year’s Fish Futures banquet. We were to be there four days and while the fishing action was non-stop, it was the warm friendly family atmosphere that impressed us the most, never mind the incredible gourmet meals.
Here follows an account of our four days at the lodge:
DAY ONE
Lake Waskaiowaka is a trophy pike factory and Jerry Dunlop has made a career out of guiding his guests to trophy fish. This large body of water is located a short half hour plane ride from Thompson, made easier by the fact that the lodge has an airstrip. Steven and I pulled up to the Missinippi terminal at 6 a.m. to unload our gear. A number of other guests from across the U.S were there waiting as well. Also along were Murray, Dennis, Lionel and Dylan from Lorette. Lionel had purchased this trip at the Fish Futures May banquet. Part of the deal is that they got to fish with Steven and myself and we would host the four days.
After arrival at the lodge, we were feed a hot breakfast as our gear was delivered to our cabin. Steven and I decided to fish together the first day and Sam was to be our guide. From the Split Lake community, Sam had been guiding on Lake Waskaiowaka for five years. As we prepped our rods and reels we found out from Jerry that this spring was five weeks ahead of last year, meaning a lot of the big pike had already moved out of the bays. Our first stop that morning was in Alligator Bay on the Little Churchill River which starts its journey northeast right out the front door of the lodge. Steven caught the first two pike of the morning , both in the high 30 inch range, on Berkley Hollow Belly swim baits. I had he fly rod out and proceeded to la 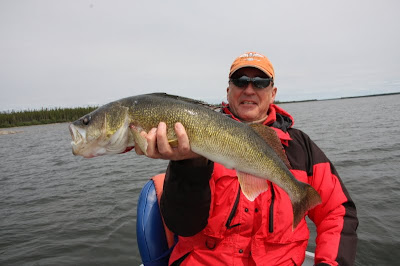 nd four walleyes on a red and white bunny along with two smaller pike. Soon, we were headed out to the Northeast Arm, some five miles out on the big lake. We fished a huge bay which had some scattered cabbage weed, While we caught a few small make, Jerry’s statement about the pike moving out of the bays because of water temperature, started to make sense. Of course the next logical spot to try was the mouth of the bays and off the many rock points. Sure enough we found a deep cabbage bed off a rocky point which held a few pike and a ton of walleye. In order to get down a bit deeper I had put on a Storm Swim Shad. It was on this bait ten minutes later that I hooked up with a 28 inch walleye, my first master angler on the lake. All day we hunted for big fish, but despite a few pike in the high 30 inch range, none over forty inches were to be landed by our group this day.
DAY TWO
I was fortunate enough to have Jerry as a guide on one of those four days and it was not coincidence that it was on this day that I caught my biggest fish of the trip, a forty two inch trophy pike that inhaled my Rapala Sub Walk lure. Jerry was moving the boat between two islands over a shallow sand bar when he spotted the large pike cruising the scattered cabbage. Pointing out were the fish was I cast a Mepps Bucktail past her nose. Missing the fish on the first attempt, Jerry backed up the boat and we could see the fish about twenty feet off to the side. I grabbed a different 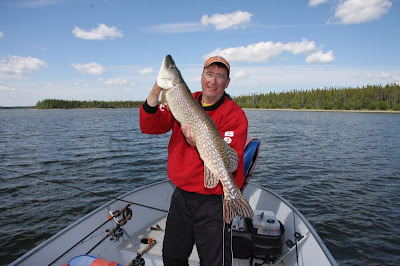 rod and reel and worked my chartreuse and white Sub Walk right towards the fish. This time the big pike made no mistake, T-boning the lure by the side. With a good hookset, I knew this fish was not coming off. Sure enough after a couple big runs Jerry got the cradle under the pike, keeping the fish in the water to take out the hook. Once I had my camera ready we quickly took a few pictures and I then held the fish back in the water to recover. Jerry leaned over the side of the boat to see if there was any damage to the fish. That’s when the large pike had had enough, sweeping its teeth across Jerry’s finger before disappearing. 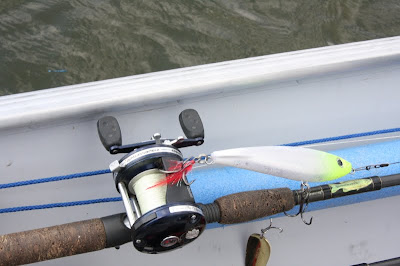 TROPHY PIKE BAIT- RAPALA SUB WALK
DAY THREE
I was teamed up with Lionel on this day and he ended up with a couple of nice pike just short of Master Angler length. We also caught a ton more walleye. With the beautiful weather we had all trip we also headed out in the evening to spots close to the lodge. On this evening we had some great fishing on Cliffs Point just a five minute boat ride away. 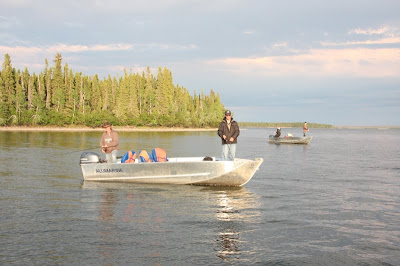 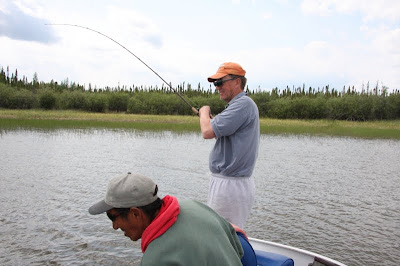 DAY FOUR
With Johnny as my guide and Dennis as my guest this day was memorable for the number of fish caught and the quality of both the walleye and pike landed. We started off on Peterson Point slamming 22-25 inch walleye on swim baits. Every once and a while a big pike would interfere. Then we headed down to no name creek, about an hour boat ride from the lodge. While this creek did not look like much upon arrival we were soon to find out that it was chock full of big healthy walleye. And of course when you find a lot of one species, Mr.Pike is not far away. We ended up catching walleye until our arms were sore, plus I managed to land a 38 inch pike as a bonus. 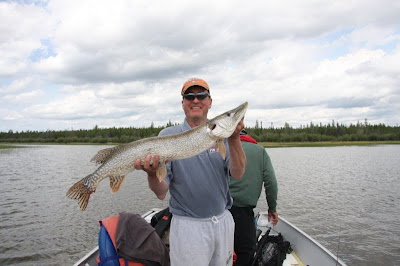 Steven and Dylan were just down the creek from us. It was here that Dylan lost a pike of monstrous proportions.
IN SUMMARY: We had great walleye fishing even though we did not target this species, they just showed up everywhere and would hit pretty much anything that moved including huge swimbaits, even my Sub Walk. The pike fishing is so good on this lake, that pretty much every day a number of Master Angler fish are registered. The week before we arrived one angler hit the magical 50 inch number, something I have dreamed about all my life.
NICE PIKE HIDING IN NO NAME CREEK
MEALS: The food on this trip was out of this world good. Chef Jim Peters, in his third year, made each meal a memorable one. I had met Jim at the same show in Chicago a couple years earlier and he kept on as chef, partly because he loved to catch big pike. As far as he was concerned Dunlops was the spot. 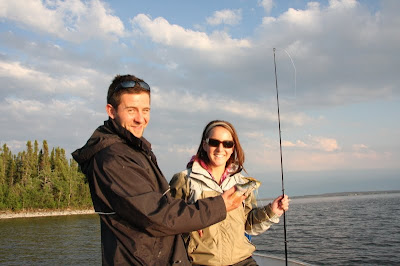 CHEF JIM OUT FISHING WITH NATALIE

EQUIPMENT: All the boats were brand new with 30 four stroke Yamaha Outboards. While equipped with electronics most of the guides did not use them enough or they lost their signal at high speed. If I was to return I would bring my own.
GUIDES: Were knowledgeable, friendly and hardworking, willing to listen and try new spots and techniques.
For more information on the lodge visit their website at www.dunlopsfishing.com.