Trout time in the Parkland region 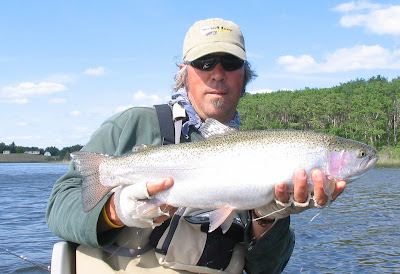 The float tube was loaded and ready to go, three fly rods packed and the open highway in front of me. It was time to head to the Parkland region for some world class trout fishing. In the last three weeks, the weather has been absolutely ideal for those who like drift around on a lake in a small craft, either a float tube or small pontoon float boat. I can remember just such a trip ten years ago to West Goose Lake in the town of Roblin. I was fishing with trout master Bob Sheedy, who was introducing me to the nuances of stealth fishing for shoreline rainbows. I would have to say that this was as exciting as any other form of fishing that I have ever tried. The only thing that comes close, is streamer fishing for big pike. As Bob and I floated down the north shore, he continued to point out the swirls and ripples created by big trout chasing minnows in the shallow water. One particularly large specimen was to be seen working around a shallow rock, totally unaware of our presence. Bob told me to make one false cast to measure the distance to the rock, then lay the small silver streamer to the side of the rock, two metres from where the fish was feeding. Sure enough, the cast was perfect, not close to enough to startle the big rainbow, but still within the strike window. In a flash the fish was on the fly, and as I raised my rod tip to set the hook the fish headed for deeper water, stripping line in a smoking run. Before coming on the trip, Bob had warned me to make sure my fly equipment was up to par. He preferred an eight weight rod to handle the massive trout that exist in many of the lakes in the Parkland region. My custom made fly rod with a G Loomis blank was incredibly responsive. It was also bent over, yielding to the strength of this powerful fish. Finally after a few dizzying runs, the gorgeous fish was seen down below my legs, soon to be netted and released. Bob managed to get a couple pictures of the fish, but its splashing unfortunately had a put a water spot right in the middle of his lens. It is a picture that I love to look at often, bring me back to one of the most exciting 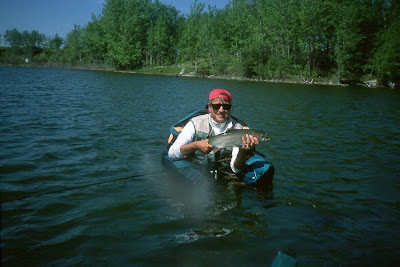 moments in a long career. That type of opportunity exists out there for those who want a little adventure. To find out more about the lakes on the western side of Manitoba visit the Fishing Lake Improvement for the Parkland region site www.flippr.ca .
There is a wealth of information to be found, especially under the articles section. One particularly good article comes from writer Bob Morenski who takes you through the seasons on Patterson Lake, one of the top lakes in the region. Morenski, who is retired and lives in South Dakota fished over 130 days on Patterson in 2008. His knowledge of the lake and the brown and rainbow trout that swim there, is staggering. I have fished with Bob, a man with an incredible wealth of knowledge.
Anglers Notes: 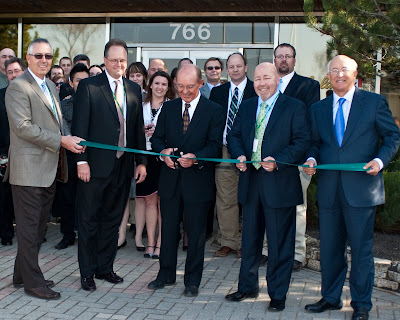 I was invited last week to the grand opening of Cabela Canada’s new distribution center and Corporate head office located in Transcona. It is a huge facility with over 125,000 square feet of space. The distribution center has the flexibility to grow up to 320,000 square feet to handle Cabela’s stated goal of future retail store expansion throughout Canada. Just a reminder while the season remains open for stocked trout and lake trout, the general season opening for the south is May 15th.

Speaking of youth angling, here is a tremendous opportunity for those interested in fly fishing to step out on the world stage. Fly Fishing Canada, in conjunction with the host community of Roblin, will be conducting a youth fly fishing clinic near the village of Sandy Lake on May 22nd and 23rd. The event is the kick-off for the Canadian National Fly Fishing Championship Week to be held from May 27th-29th, based out of Roblin. Participants will be instructed in the art of loch style fly fishing, which is practiced on stillwaters throughout the world during competitions, along with other valuable fly fishing techniques. Youth between the ages of 13 and 18, from anywhere in Canada, are invited to attend. Among the many instructors available will be the gold medal team from the 2009 Canadian Nationals and the Soldier Palmers Ream Quantum, a team made up of British Military on R&R from Afghanistan and crossing the Atlantic to participate in the 2010 National Fly Fishing Championships. Boats will be provided for training, as well as some limited tackle for those lack equipment but who still wish to participate. For more information, contact event coordinator Kelly Keast at robgolf@mts.net.