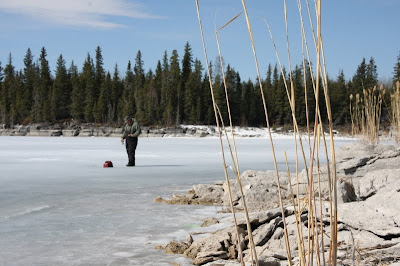 Late Ice in Northern Manitoba
It was day three of our ice fishing adventure to northern Manitoba and on this particular day we were headed to Barbe Lake, one of the more famous of the stocked trout lakes in the province. Located north of The Pas on the Sturgeon Landing turnoff, this lake has been making headlines since the world record brook trout was caught there in 2006. Tim Matheson of Sherridon (northeast of Flin Flon) and a friend had launched their boat on October 21st in search of a trophy trout. Little did he realize at the time that it was a day that was about to change his life. They were trolling crankbaits on Barbe Lake when something really large grabbed a hold of his bait, a jointed chartreuse Rapala. It turned out to be world record brook trout in the catch and release category. Measuring twenty nine inches with open tail with a girth of twenty one inches it was a true trophy. Tim quickly released that fish back into the two degree Celsius water after taking some pictures of this incredible brook trout. While this fish overshadowed everything else they caught that day, there was some big rainbow landed as well. 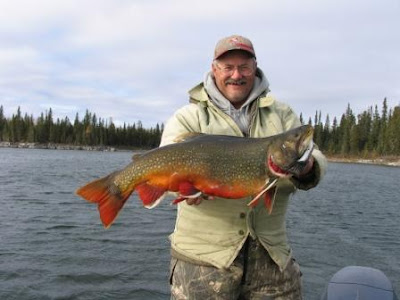 A replica of the brook trout now adorns a wall at Kenanow Lodge on Kississing Lake, his fulltime home. Tim has been back to Barbe eight times since that day but nothing that large has come his way since.
EXPECTATIONS:
As we checked out the ice this first week of April day, we did not have any expectations of catching fish near the massive size that Tim had landed 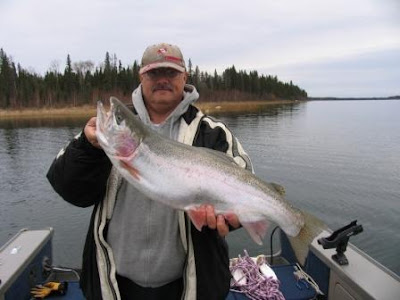 that incredible fall day. We were just hoping to find a few brook trout in amongst the abundant rainbow that were all over the lake. The good news that the ice was a solid 21 inches thick and we could drive wherever we wanted. So off to the far end of the lake we went, Rick Hubbs leading the way to the spot we had fished four summers ago with some degree of success. In fact it was on this end of the lake that we had lost two massive rainbow trout, well over master angler size.
As we set up our lines along the breakline in nine to seventeen feet of water, my Humminbird flasher indicated that there was no shortage of fish in the area. In fact, in the first five minutes I had three fish move right in on my bait, to exit stage left, not a particularly encouraging sign. 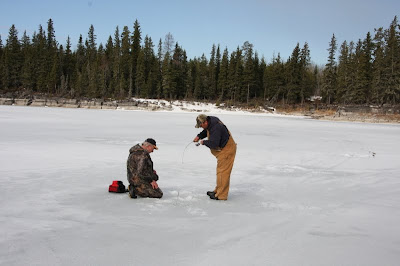 As the day wore on and sun blazed down on us we managed to catch a few aggressive male rainbows, none of the bragging variety. Nary a brook trout was 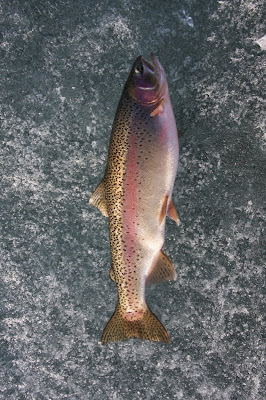 spotted on the underwater camera. Too soon it was time to pack up and head on down the road to our third destination on this trip, Footprint Lake north of Grand Rapids.