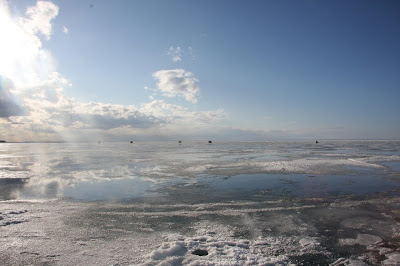 The sun was shining as we headed north on Highway Six on our way to The Pas, Manitoba. It was the first week in April, and we had three and a half days of trout fishing planned and according to the weather channel we were to be blessed with some mighty fine conditions to catch fish in. Arriving at the house of friend Rick Hubbs on the shore of Clearwater Lake later that afternoon we could see the water shimmering on the surface of the lake in the bright sunshine. It was wet, said Rick, but the ice was still thirty one inches thick and getting around was not a problem. Staying at Carpenters Lodge just down the road, we unloaded the quads and headed out to a couple spots close by. I was joined on the trip by Murray Olafson and son Wesley with Rick as our tour guide for most of the adventure. As we splashed out to our first spot, we were amazed at the amount of water that was being sucked down each hole as we drilled in our first location. 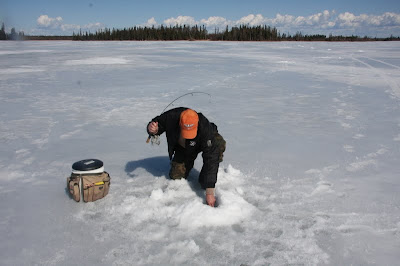 While action was slow that evening, the beautiful weather with the high cumulous cloud and gorgeous sunset more than made up for it. Early the next morning we headed far down the lake with Rick leading the way in his 1981 Land Cruiser. We were to fish a large bay which had a shallow rock reef in the middle and sandbars all ar 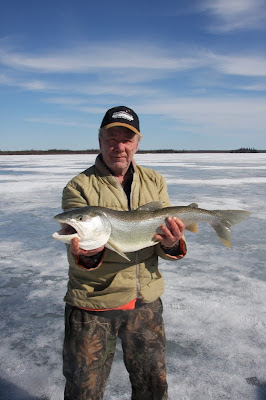 ound. Hubbs discovered this trout hotspot by accident a few years back, originally looking to catch some pike. After landing three lake trout over twenty pounds instead he knew he had found a honey hole. Since that time, every April he ventures back in this bay to find the shallow water trout. These fish are feeding on the small tullibee that move into this area during last ice.
As we drilled holes across a wide area most of the success we had as the day progressed was along the deeper water side of the reef, anywhere from fifteen to twenty feet. In no time at all I had a fish on and lost it at the hole, a nice trout. Then Ricks fishing partner Dale Kerwin landed one, then another and another. By the time we packed up in mid-afternoon close to twenty lake trout had been landed, a pretty decent day in any ones book. In catching this fish, the key was to keep your bait tight to the bottom, a white tube jig from Berkley the top performer by far. Most were tipped with a very small piece of sucker to add a little extra scent. A key piece of information that I learned on this day came from Dale, a guy that not only caught the most trout but did it using a hockey stick. Yes that is right a hockey stick, or at least the handle of one. He used it to store his line, while jigging his tube bait by hand, the same method he used to land his fish. Dale explained to me how he made sure the bait would glad forward and not spiral, the key element in catching lake trout on this particular lake.
Further to that, most of my success in catching lake trout through the ice over the years has been with baits that glide and dart through the water column. Baits like the Walleye flyer jig from Lindy, tipped with small Berkley power grub with the tail cut off, then tipped with small slice of sucker cut in a thin triangle (belly piece is always the best) . The 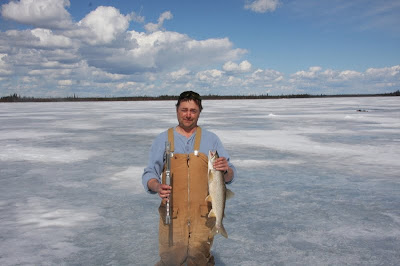 key when rigging your jigs is not to overpower the lure so it becomes unbalanced. Smaller airplane jigs still catch trout as do jigging spoons but these are aggressive presentation for aggressive trout. On Clearwater on this particular trip, the fish were anything but. A fluorocarbon leader and finesse techniques were required to put fish on the ice.