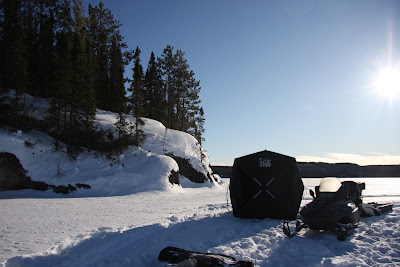 Anglers in Northwestern Ontario have been taking advantage of the warmer weather to chase down some lake trout. While not as much snow as last winter there is still enough to get around on snow machines. On Lake of the Woods, the winter roads have been plowed but venturing off the beaten track in a vehicle is always risky. On the smaller lakes in the region, ice is good and the slush is manageable. I take at least one trip every year either in January and then again in late March for lake trout, a worthy adversary below the ice. As in most species, it pays to be mobile when trying to find active fish. It’s not unusual to try at least ten different areas in a full day on the hard water. Locations will change depending on time of year and the type of lake that you are fishing. On a crystal clear Canadian Shield Lake with plenty of deep water there are a number of different areas to try and variety always increases your chances of contacting active fish. I usually fish a medium sized Shield Lake that holds a decent population of lake trout and plenty of deep water which helps produces some large fish as well. Over the years I have tried three different types of structures, extended flats in thirty to fifty feet of water, shoreline points that drop off into deep water and sharp dropping granite bluffs that lake trout use to herd ciscoes. On a trip last winter, it proved to be a combination of this type of structure that was the most productive. I and two other friends fished a sharp shoreline drop off between an island and another point of land, which we anglers like to call a funnel area. We use this term as it relates to the underwater structure. With shallow water on both sides, if the lake trout prefer to stay in deeper water they only have a restricted area to use. This helps narrow down the search for them and also increases the odds of contacting active fish. It’s not the most obvious spot on any hydrographic map but usually quite productive. After drilling half a dozen holes, we started working the water column from bottom to top with a variety of heavy spoons and jigs. Fifteen minutes after arrival, I had the first hit, a small tap on a rapid retrieve to the surface. Dropping back down to about the twenty metre level, I jigged my Swedish pimple in the zone where I had the hit. Sure enough the trout came back. Rolling and head shaking like only a lake trout can, I eased him toward 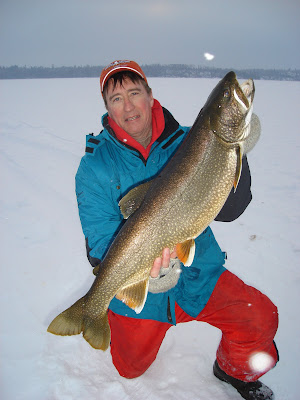 the surface. Friend Steven Wintemute was waiting beside the hole, making sure to take the transducer out of the ice hole to avoid tangling. Unfortunately for me the fish shook the hook just below the hole. Encouraged, we renewed our angling efforts with increased concentration. Ten minutes later Steven hooked into another fish and judging by the bend in his rod, I knew this was a smaller fish. Still, a short time later we had our first laker on the ice. Steven had another fish on right away, a big solid lake trout that hit his white tube jig ten metres below the hole. I rushed into his portable tent, just in time to the see the tube drop out of the fish’s mouth below the hole. One of the neat parts about fishing on a lake like this is the water clarity- you could still see your lure ten metres down.
I hurried back out of the tent to my hole, figuring if there was one good fish around, there could be more. Sure enough on my very next drop with a glow and chartreuse Lindy Flyer jig tipped with a two inch Berkley Gulp smelt I had a fish almost rip the rod out of my hand with the strike. This was no small fish, my rod bent over almost to the hole. Five minutes later I had made little progress, the laker rolling and bulldogging to shake the hook. Gradually gaining line, I could see that I had the fish now up to the twenty five metre depth range on my Humminbird Ice 55. It had been twenty years since my last visit to this lake and it might be another ten until I come back but the memories of this day and others will last a lifetime. These kinds of experiences are out there, a myriad of lakes to choose from with nobody around but you and the ravens.
Anglers Notes: It is now official, Kennedy Ironstand’s painting entitled “ The Big Chase” has been selected the winner of the 2010 Youth Angling Art Competition. Ironstand’s painting was chosen first by a panel of five judges from a number of entries across Manitoba. Kennedy lives on the Tootinaowaziibeeng First Nation at Shortdale. Just fifteen minutes from Grandview in the Parkland region, Kennedy transferred recently from Ericksdale. It was Ericksdale art teacher Kim Branconnier that encouraged Kennedy to enter the contest. Branconnier pulled Kennedy away from a school project to enter the contest and she says he had the painting done in one class. Kennedy’s mom Diane says her son has been fishing since he was two but his drawing fills up much of his life with folders and folders of artwork. Kennedy is fourteen years of age. His painting will now adorn the front of 50,000 youth angling cards that will be handed out this year to anglers under sixteen years of age in Manitoba.

Labels: lake trout through the ice