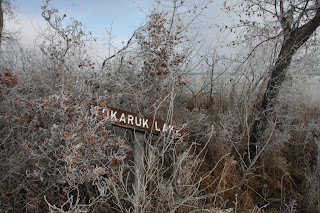 It is five o’clock in the morning on Grey Cup day in Canada and I am celebrating by going on the first ice fishing adventure of the winter. As we pack friend Steven Wintemute’s truck, we are excited about the prospects despite the early hour. Our first stop was to be Tokaruk Lake, one of the most famous of all stocked trout waters in Manitoba. Over the years this shallow prairie lake has had its share of problems, from perch infestation to winterkill. This winter, though, plans are to provide aeration so the plentiful population of brown and rainbow trout can survive and thrive once more. Tokaruk is located just north of Oakburn, and a stone’s throw away from another of Manitoba’s 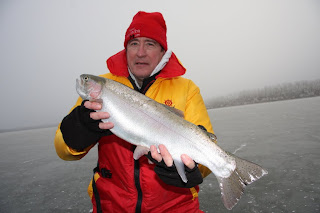 most famous trout waters, Patterson Lake. As we pull down to the small boat launch and dock at just before eight a.m. we see another couple of anglers set up in the western corner of the lake fishing a shallow weedy bay. As we pull our small sleighs out on the lake schools of minnows dart back and forth under our feet in the clear ice. While for some it might seem disconcerting, to us it meant the lake was alive and healthy. Quickly drilling a series of holes in the five inches of good ice, we tried a variety of spots from shallow to about nine feet of water off the edge of the weed line. Here we set up our portable tent and heater, a place to get out of a cool west wind that was making ice. Steven took this occasion to be the rover, the guy that checks out all the different depths while I hunkered down in the tent with two lines set up. For twenty minutes all was quiet then my flasher lit up as something large caused the Humminbird to show a bright orange. Quietly getting off my pail, I peered down the series of four holes we had drilled side by side. Sure enough, there he was, an extremely large rainbow cruising the bottom, checking out my baits. On the end of one line I had the new Northlands Bro Bug jig rigged with a dead salted shiner minnow in the middle and on the other, a Northland Mud Bug tipped with a yellow power honey worm on to which I had added a Berkley orange sparkle power egg. Lo and behold after a bump, the big rainbow engulfed the honey worm and the battle was on. After about a dozen smoking runs, I could see this massive rai 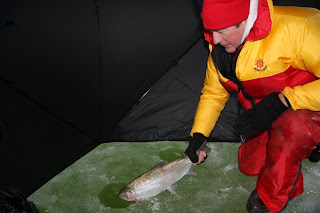 nbow swim around under my feet, Steven ready to help get the fish on the ice. After getting the fish to hole ten different times only to have it make another heart pounding run, I thought the fish was finally worn out as I tried to force the head up the hole. Bad idea, the jig popping up the hole past Steven’s head, the hook straightened out. I could only shake my head in amazement at the power of this Tokaruk rainbow. Re rigging I only had ten minutes to wait this time before my flasher lit up once again, one rod dipping to the hole. Setting the hook, I could feel the jig slipping out of the fish’s mouth. Sure enough as I reeled in and looked down the hole I could see another massive rainbow swimming near the bottom in the crystal clear water. Re hooking a salted shiner, I fluttered it back to the bottom. As the bait got two thirds of the way down, the rainbow slammed it, picking the minnow right off the hook. Reeling back in again, I put another on and 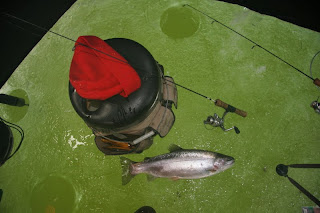 dropped it back down. This time the rainbow came straight on at the jig engulfing the bait. There was no doubt I had the rainbow hooked well this time as my four pound fireline disappeared off my spool at an alarming rate. This fish was in the same size category as the one I had just lost so I was determined not to put too much pressure on. After another incredible battle I managed to land this Tokaruk trophy. After a couple of quick pictures, this Manitoba Master Angler was released to fight another day. In next week’s column we head over to Patterson Lake.