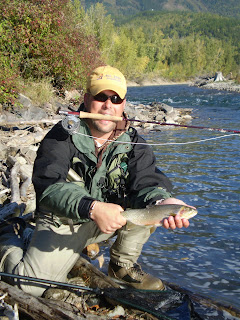 Did you know that if you can get a young person to try fishing before he or she is eleven years of age the chances are pretty good they will do it for the rest of their lives. It’s no surprise then that Ryan Suffron turned a boyhood dream into reality. 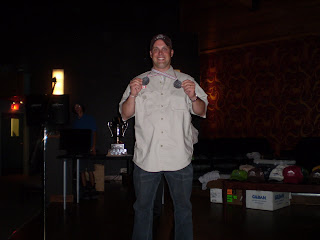 Ryan grew up in Alberta and had a father that loved to fly fish. He got his first fly rod when he was eight years old, accompanying his dad on many a fishing adventure. After moving to Manitoba, Ryan decided to guide up north at a couple of fly-in fishing lodges, fine tuning his fishing skills, a fly rod in hand whenever the opportunity presented itself. Suffron’s most memorable experiences came at this time, guiding the Hayes River in search of massive brook trout. This experience of fishing moving water was to hold him in good stead at the recent Canadian Fly Fishing Championships held in Fernie, British Columbia. Part of the competition was held on the Elk River, one of the best cutthroat trout and bull trout waters in Canada. His guiding experiences on the Hayes taught him how to read moving water, increasing his understanding of how fish relate to current. Ryan consistently caught fish during the five sessions of the event and was in first place going into the last day. The fishing was extremely challenging but Ryan persisted to catch fish in all five sessions, an accomplishment only enjoyed by one other angler. Unfortunately he came up one fish short, winning the silver medal. Ryan’s team (Team Double Hauls) also took team silver during the event.
“ I am very proud and fortunate to have won a silver medal and contribute to a team medal as well, but the biggest honor is to have represented Manitoba and to bring home a medal in return.”
The three-day event saw 45 individual anglers from across Canada competing on the legendary Elk River and local still water, Summit Lake.
Ryan will also be competing in the 8th Canadian National Fly Fishing Championships, which will be hosted by the Parkland in Manitoba from May 24-29 in 2010. Ryan is also the Executive Director of the Manitoba Lodge and Outfitters Association.
FLY FISHING CONTEST FOR YOUTH :
If you want to have a chance to be the next Ryan Suffron, how about the contest the Manitoba Fly Fishers are running in conjunction with Manitoba Youth Angling! The winner will receive a four piece Scientific Anglers complete fly fishing package, along with a MFFA fly box containing two dozen flies tied by the Fly Fishers club members. A family membership to the MFFA for the 2010 year is also included so that the winner and their family can take part in the club activities throughout the year and learn to fly fish with the MFFA.
In a 100 words or less outline any experiences you might have had fly fishing or if you have never tried fly fishing but would like to learn tell us why.
Please submit your entry on line under the submissions button at http://www.youthangler.ca/. You must be a member to enter. If you have a picture to go along with your story even better!
Entries will close on November 30th and the winner will be announced on the Youth Angler website by December 15th.
Judges for the contest will be the Executive of the Manitoba Fly Fishers and their decision will be final.
For more information about the Manitoba Fly Fishing Association visit them on line at http://www.mffa.org/.