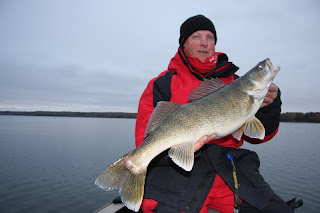 There is no substitute for spending time on the water, especially if you can work the same body of water for the same species. Accomplished anglers and guides can then pattern and increase success rates for both themselves and clients.
On a recent trip to Tobin Lake for walleye I decided to head up with an open mind, a number of presentation options thought through and accounted for. I was also fishing with two other accomplished anglers, anglers who had thousands of hours on the water and who also liked to try different techniques that might improve success. Now Tobin is well known to us, in fact I had been fishing it since 1979 but over time things change. Fish become conditioned to certain presentations if there is a lot of fishing pressure and improvisation and hard work usually helps. 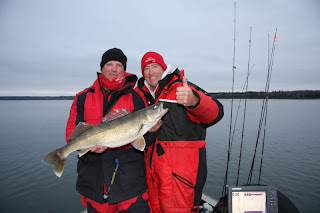 After a slow day one on the main lake, we moved back into the river itself. On the first part of the day we decided to run bottom bouncers and spinners, a throw back to the early days of fishing this particular body of water. In 1989 my partner and I won the Premiers Cup tournament using bottom bouncers and big blades running the boat with current. Talk about good memories as I hooked up with the first seven walleyes caught that day using the exactly same technique. In fact it turned out to be an awesome day with more that forty walleyes caught as we found aggressive fish everywhere. Later that day we made an adjustment that capped things off. I had made sure to pack some three way swivels and floating crankbaits. 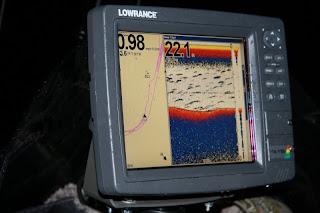 This was a switch over from straight power trolling using deep divers and leadcore or fireline. Man, talk about success! On our first pass with Berkley Frenzy Minnow Baits, we had on nine fish, the biggest ten pounds! Over the next couple of days we switched over to bottom bouncers instead of three ways. This allowed us to contour troll the edges of the channel a little better. Not only that we only had to let out forty one feet of line to get our baits were we wanted them in 25 feet of water. The applications of a bottom bouncer/floating crankbait setup has tremendous application for river fishing and contour trolling not to mention the wide range of crankbaits you can now use. Give it a try, you will not be disappointed. Just remember to not use too long a snell, thirty six inches is usually plenty. 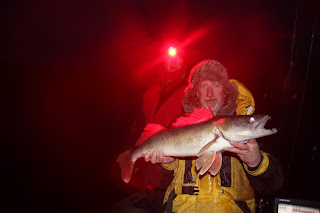