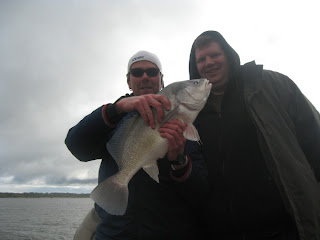 Todd MacCulloch is one big guy and he likes to fish! Recently I had the opportunity to take Todd out for a day fishing on Lake Winnipeg. Todd had spent his high school years in Winnipeg, starring as a basketball players and part time comedian (by his own admission) at Shaftesbury High School. You see Todd is no ordinary basketball player or individual for that matter. He is a legitimate seven footer and played in two NBA Finals! Before we get to that, lets back it up a bit. Todd grew up fishing as a young lad in Prince Albert Saskatchewan, his dad a pilot with the RCMP. Maybe that is why we got along so well on this cold wet day. Prince Albert is also the place I developed such a passion for the sport. 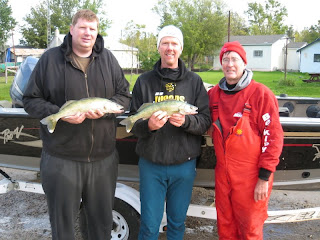 What’s it like having a guy that is over seven feet tall in your boat? Crowded I found out! Friend Bryan Gray had lined up a fishing day with Todd when he was back in town to be inducted to the Manitoba Basketball hall of Fame. Bryan is not exactly short at six feet nine inches so when I loaded them in the boat at Pine Falls I had a massive wind break as we headed the seven miles out to Traverse Bay.
We began our fishing day at the first island on the right as you come into Traverse. Marking a few scattered fish in twelve feet, I handed Todd a jigging rod rigged with some power bait and a shiner. He quickly had the first fish of the day on, a small walleye but lost him at the side of the boat. The guide (me) had forgot to put the net in the boat! After a couple of drifts we had four walleye in the well and Todd was still trying to figure out how to lift these fish over the side of the gunnels, walleye number two of Todds once again escaping.
After a quick tour around the north side of the river channel, we rigged up some crankbaits and headed south onto the mud flats in the middle of the bay. Using medium diving Berkley Frenzy lures in silver, blue and chartreuse we had non-stop action. As the day went on, and Todd got more soaked he kept relating story after story about his experiences in the NBA with the likes of Allan Iverson and various other stars. One of his favorite memories involved fellow Canadian NBA star Steve Nash whom he played with on the Canadian National team. Todd vividly recalls the game in 1999 when they beat Puerto Rico to qualify for the 2000 Sydney Olympics. Todd was having a terrible game but Steve Nash took it on his shoulders to win the game that qualified the team. Todd then came through in the final against the U.S Dream team to score 22 points to go along with the 16 rebounds. It was this game that got him drafted into the NBA.
Here are some excerpts from a few of the stories he related to me:
Larry Brown and Allan Iverson: As long as the team was winning and playing defense Larry didn’t mind Iverson taking 30 shots a game.
On Allan Iverson: A good friend and always supported Todd
On Tony Kukoc: traded to the 76ers in 1999, he had played on a number of championship teams with the Bulls and Michael Jordan. Todd would also sit on the team plane ( a customized jet) with Tony. Tony was not a talker and only allowed Todd one question a plane flight…When asked what it was like playing with Michael Jordan, Tony replied “very, very good!
Todd played Division One NCAA basketball at Washington State, then was drafted in the second round of the 1999 NBA draft by the Philadelphia 76ers. I can remember watching Todd in the NBA Finals, first with the 76ers, then the next year when he played for the New York Nets. Both times Todd came up against the formidable Shaquille O’Neal.
On playing against Shaq, Todd relates their first meeting the finals..Todd was subbed in and on the first rebound, Shaq went right over Todd and landed his elbow on Todds collarbone. As Todd crumpled to the floor, he could hear his coach yelling at him to get up…and his teammates laughing at him…Todd did say things got a little better after that, but says Shaq is so strong it was amazing.
Todd now lives in Seattle, Washington, is married, with a eighteen month old daughter. He is planning to continue his career in broadcasting with pro pinball as his hobby. Todd was forced to retire early in his career because of a neuromuscular disorder in his feet that made it difficult for him to walk, let alone run. Todd says he is better now and is even able to play nine holes of golf.