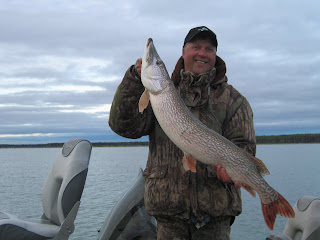 When people ask me about a great drive to place for big pike I mention Cross Bay and portions of Cedar Lake. This fishery is located above the dam at Grand Rapids. The Grand Rapids Generating Station was built between the years of 1960 and 1968, and this huge structure was the first major hydro-electric project in northern Manitoba. Grand Rapids was the logical spot to put the dam because of a series of natural waterfalls along this stretch of river that formed a total drop of thirty five point six metres. Alexander Mackenzie, first traveled this route in July of seventeen ninety three and in his journals described the area as abundant with wildlife and its waters rich with fish, especially sturgeon. As the dam was built, a large reservoir was created above the dam in Cedar Lake. Its water level was raised three point five metres, flooding a large tract of land, making it now cover an area of close to thirty five hundred kilometres. Cross Bay is on the east end of the lake were the reservoir drains into Lake Winnipeg. It is closed to commercial activity and produces huge walleye and pike .
I spend a fair amount of time chasing big pike and Cross Bay is as good a drive to pike fishery has I have been on. Four falls ago at Cross Bay discovered that unstable weather had made the pike very lethargic. Switching over to cisco rigs turned the trick, triggering inactive pike to strike. Consisting of a single hook on the front of a piece of wire leader material and a treble a few centimetres back, we add a small rubbercore sinker up the line a short distance to get the bait to the bottom. Using the front troll motor to slowly work the baits (cisco’s, herrings) we started trolling across a huge bay that 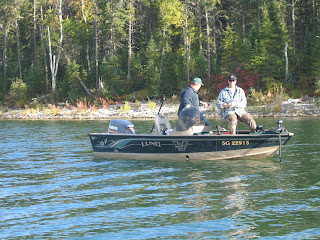 was noted for it’s large pike population. After taking a couple of turns around the bay, we discovered that one section of the large bay had a fairly extensive rockpile. On one side, the reef dropped sharply into deeper water with scattered clumps of weeds along that same side. This proved to be the most productive part of the bay and by trolling our rigs right at the edge of the break we had constant action. As for equipment we used a baitcast rod and reel setup rigged with twenty pound test flame green fireline. With the bail constantly open, we would thumb the inner spool to keep tension. If the water got deeper, we just eased the tension off the inner spool and let the bait drop. If we moved shallower, you would have to engage the spool by cranking the handle.
If you felt a fish hitting your bait, in this case a big ciscoe, we would give the fish a little line and time to turn with the bait. As the pike moved away with the bait, we would engage the spool and sweep set the hook. In almost every case this would get the pike in the corner of the mouth, making these fish very easy to release. We caught a number of large pike using this technique including friend Boyd Holmen’s forty three inch pike.
Cross Bay is also famous among walleye anglers in the know here in Manitoba. That is another story for another time.