Paddling the Parkland for big trout! 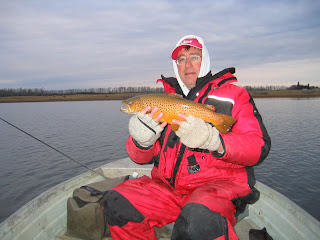 Time to get out the float tube and fly rod, fall is officially here. It’s been three years since I visited some of my favourite trout lakes in the western part of the province, way too long.
One of my top picks and probably the best place in Manitoba to catch a trophy brown trout is a small lake located north of Oakburn on Provincial road #577. Patterson Lake, is tucked down in a valley, surrounded by poplar, aspen and willows, making it a great destination for the float tuber, even when the wind is blowing. While both rainbow and brown trout exist in abundance, the brown trout have probably provided the most trophy action for the majority of anglers who have visited the lake over the last three years. Given the life cycle of these fish, this fall should provide the best opportunity to catch a massive brown, one in the twenty-nine inch range which would be the new Manitoba record. 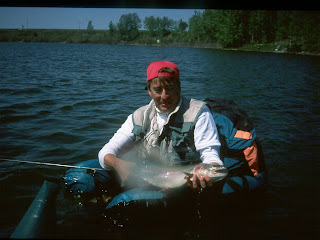 Oh by the way, there are rainbows in the lake that are probably over thirty inches! Wow.
For those who like to fly fish, biologist and avid angler Ken Kansas recommends the “Parkland four pack”. That means a collection of flies that represent the forage available to these fish; minnows, backswimmers, scuds and leeches.
On my last visit Ken was using something called a “Psychedelic p-quad, I went with a Parkland favourite, called the “Blue Ellis”.
Ken worked as a fisheries technician in the Parkland region from 1990 to 2005 and he just one of a group of individuals responsible for the success story with salmonoids in this part of the world.
“There are two kinds of trout lakes in Manitoba’s Parkland” says Kansas “and each required a different management approach.”
“The more pristine, oligotrophic lakes of the Duck Mountains are cool and clear due to elevation and semi-solitary confinement from human activity (Childs, Laurie, Gull, Glad, Perch, East and West Blue, etc.) . 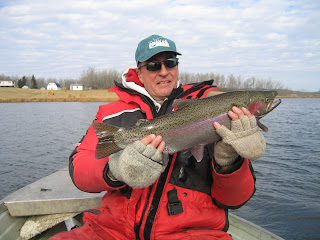 The other types are the eutrophic, mountain periphery lakes south and west of the Duck and Riding Mountain escarpments (Twin, Spear, Tokaryk, Patterson, East and West Goose).
These lakes are generally shallower, warmer and subsequently more productive than the upland lakes.
What this essentially means is both kinds of lakes grow huge trout. The periphery lakes just do it faster.!”

Officially opened in October 2002 Patterson Lake has turned into a huge success story. Kansas says it highlights what can be done when individuals and organizations work together. For years anglers from all over North America have been visiting stocked trout water in the region but in recent times some of the lakes have been hit hard by winter kill and perch/pike infestations. In order to help the fishery, people like Kansas, Bob Sheedy and Free Press hunting columnist Robert Sopuck got together and formed an organization called FLIPPR. (Fisheries Lake Improvement for the Parkland Region)
They have also convinced local municipalities that their support would help local tourism. A prime example is the R.M of Rossburn, who supported the aeration of Patterson and purchased the land. FLIPPR continues to monitor the project and provide input for further use.
A lake management strategy was developed that detailed that a combination of rainbow and brown trout would be stocked on an annual basis of one hundred fish per acre. Also implemented were a one fish limit, artificial lures only and no gas powered motors in order to maintain the quality of the fishery. 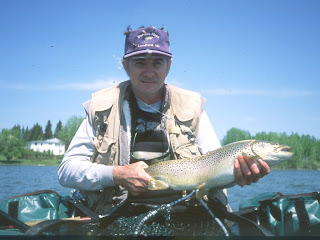 Funding for FLIPPR operations comes from various sources, but primarily, when regarding capital expenditures, from governmental and heritage sources.

Labels: trophy trout in the Parkland region of Manitoba