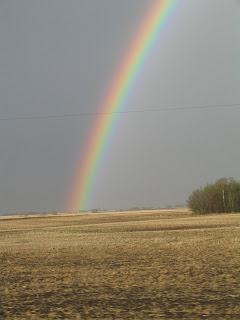 Ever been caught on the water in the middle of a thunderstorm? It is not the most pleasant of experiences. In fact people in North America die every year when lighting strikes the boat while out on the water. I had a life and death experience while fishing a walleye tournament on Last Mountain Lake in Saskatchewan. It was the second day of the tournament and the forecast called for rain and wind but it seemed many of the contestants and tournament organziers were unaware that there was the possiblity of thunderstorms. Everything started okay in the morning with a little light drizzle falling as we headed south by boat from the tournament headquarters at Rowans Ravine Provincial Park. This was my 17th appearance at the tournament and you can usually count on some wild weather, at least as far as the wind is concerned. Big waves can pile up in a hurry on this body of water and a stiff 60 kilometre wind from the northeast was making life difficult
for the 109 two person teams that had paid the $400 entry fee of the Last Mountain Walleye Classic. Rollers in the two metre range were common but that was nothing compared when one of the worst storms that I have experienced hit the lake around 10 a.m in the morning. Lighting bolts were coming down the lake from the north, hitting trees along the shoreline, some narrowly missing two boats that were trying to make it to cover. A few of the anglers managed to make it back to the weigh-in site but my partner Jim Price and myself did not have the option. We were 12 kilometres south of the weigh-in site and would have to have driven right into the fury of the storm. Lighting bolts started to zip around us. What to do was the question. Both Jim and myself felt helpless, not knowing the answer. Five other boats were in the same predicament but we were the only ones to head towards shore, into a sheltered bay a short distance away. Price knew the danger involved, his boat taking a bolt of lighting two years ago on Lake of the Woods. It had come down and hit the bow plate on his boat, burning a huge hole in the metal.
Four people were in the boat at at the time, but unbelievabily no one was seriously hurt. All the electrical in his boat had been destroyed and the fuse to his big motor gone. Grabbing a couple of paddles he had managed to get the boat to an island on which there was a cabin. Luckily the cabin owner was at home. He got them all pajamas while he threw their clothes in the dryer, finding a fuse for Jim’s motor. Jim did not want a repeat of that event! After an intense hour of the worst lighting I had ever seen, the storm swept east, leaving the competitors limp, many deciding to call it a day, all knowing that it was there lucky day. No one was hit in this storm but hopefully some lessons can be learned.
Here are what the experts say when dealing with marine storms, especially those involving lightning strikes.
1) if at all possible check the local marine or weather forecast, especially the visible radar to find out if there are storm cells in the area. If there are stay at home
2) Keep a constant vigil on the sky, and be aware if a storm appears to be approaching
3) If a storm does approach, head for shore, move inland, and try to get to an area of shorter trees and spread out if you are with a group. You're not safe, but it's better than being on the water.

Here are some lighting facts for you to consider.

There are various stages in lightning strike. Initially, something called the step leader, which is a negatively charged channel of air, propagates down toward the ground at a speed of about 200,000 miles per hour. As it approaches the ground, streamers of positive charge surge up to meet it. Once a connection is made, electrical current which causes the visible flash that we observe (called the return stroke) moves upward at a speed of about 200,000,000 miles per hour, the whole process is virtually instantaneous.
As the step leader which precedes a lightning strike propagates toward the ground, the point of contact is likely to be within a radius of about 20 metres of the step leader. So the chances of being struck in any individual storm are relatively small. However, if that step leader is coming down directly over your head, you're likely to be struck since you're the tallest object when out on a body of water.
I have had two other confrontations with lightning while fishing. One was on Mille Lacs Lake in Minnesota and the other at Knee Lake in northern Manitoba.
In both cases the electricity in the air was so intense that the graphite fishing rods we were using were humming and the fishing line was going straight out of the rod guides. The hair on the back of my neck was also lifting. In both cases we instantly made the right decision, heading quickly to shore and seeking shelter. In Mille Lacs we were able to get into an enclosed building, the best option in lighting storms.
At Knee Lake we grounded the boat on shore along a steep shoreline and hug tight to cover. In this case it could possibly have been life saving as a bolt hit a tree 200 hundred metres away.

Labels: what to do in a lightning storm