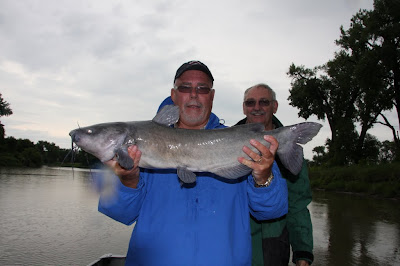 When friend John Toone and I headed down to Grand Forks a couple of weeks ago for an opportunity to fish a half day on the Red River we had no idea what to expect. Let’s face it, we have become spoiled with the world class catfishing we have here. What surprises could the river in this rebuilt community hold for a couple of prairie boys? Our first stop was Cabela’s to check out the fishing gear, then over to Whitey’s Café for a reception sponsored by this historic Grand Forks eatery. Rebuilt after the great flood of 1997 we enjoyed a delicious lunch on the outside patio and started to find out more about a fishing event that has been running the first weekend in August for twenty two years. Called the “Cats Incredible” catfish tournament, event organizers had invited John and I down on behalf of our “Fish Winnipeg” event which we co-chair. It was their first ever media day, a concept friend Brad Durick had learned from his participation the last few years at our event. Brad, who works at WDAZ, is an avid angler and guide on the Red River in the region. He is also on the organizing committee of an event that has grown in size to a point where they have to have a lottery to pick the one hundred and fifty teams that get to fish the two day event. Run by the Chambers of Commerce of East and West Grand Forks this event has become a tremendous revenue generator for the two communities split in half by the mighty Red. 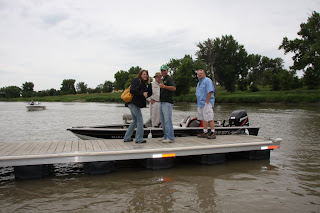 After lunch and conversation with the mayor of East Grand Forks it was down to the LaFave Park boat landing just down from Cabelas. Here we met up with our guide for the afternoon, Tom, a veteran of many a campaign on this section of the river. Tom is also the head official for the tournament itself, a pretty big job in itself, considering the boats are spread over thirty three miles of river. As we motored away from the dock, what impressed me the most about this section of the Red were the incredibly tall trees that lined the shore and a green shoreline with no buildings. Tom explained that after the 97 flood, the five hundred home owners along this section of river had been bought out and reallocated behind the dyke system that has become the lifeline of Grand Forks. On this day the river looked serene with a nice one mile an hour current rippling the muddy water. 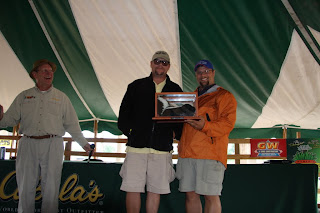 We anchored in a number of likely looking spots but it wasn’t until we moved right into the downtown area that we started getting some action. I hooked the first catfish, a good solid thirty two inch fish that battled hard. A few minutes later it was Johns turn, another channel catfish nearly the same size. As it turns out, ten fish in this size range would probably win the event. A short time later we headed in to find out the results of the first ever media event. As it turns out we finished second with a boat guided by Rob Horken (aka "Ernie the Angler") in first place.
Now comes the interesting part, something we could learn from this group. Over the course of the three day event some five thousand people come to participate in a plethora of activities. There are huge tents set up, vendors of all sorts, games for kids, free live music, even a chili cooking contest. Tom said things really opened up when the committee decided to do away with the admission fee. While the catfishing is good in this community, it does not come close to what we have to offer north of Lockport. If the town of Selkirk and the Chamber of Commerce were to get behind an event similar to this, the sky would be the limit. Not only that many of the teams in that participate in the one in Grand Forks would more than jump at the chance to head north and tangle with some real jumbo fish.
Anglers Notes: Catfish action remains excellent in north of Lockport and in most sections of the river. Hot weather has chased some fish out to their traditional summer haunts. Walleye are now set up on mid-lake sunken islands and shallow offshore reefs. Night fishing at this time of year becomes a great option.