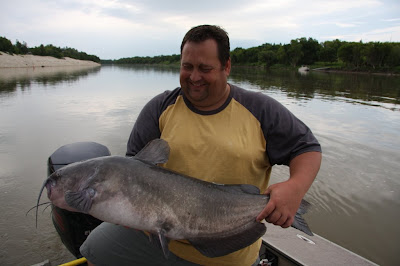 It was a beautiful evening with a light south wind blowing. Friends Steven Wintemute, Scott Sime and I were anchored just a half mile south of Lockport on the mighty Red River. What had a been a late spring had finally turned to summer and the waters of the Red River were finally starting to warm up, a surface temperatures reading of 70 F on Stevens' Humminbird deptfinder. We had already landed a bunch of huge catfish, the largest over forty inches, just a massive fish caught by Scott on a large prawn impaled on a circle hook. 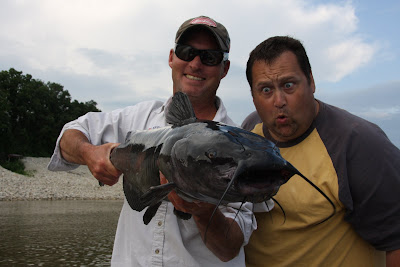 While getting ready to help Scott land this monster, my rod had buckled in half from a savage take. Dropping the net, I managed to lift the rod out of the holder as line dissappeared from my Abu Garcia 5500. As I fought this catfish Steven hauled in Scotts monster. Talk about action, this trend was continue the whole evening long. Still we weren't prepared for what was to happen next. My catfish had decided to head upstream right toward the anchor rope. Leaning as hard as I could on my rod, the thirty pound test Berkley Big Game started to protest. Finally I convinced this big fish to head back downstream right under the boat. Extending my flippin stick over the side of the boat and down into the murky water of the Red, I was able to keep the line under the prop as the fish surged away. Ten minutes later I finally could see the 2 ounce sinker appear at the back of the boat. All of a sudden the fish appeared, a jet black catfish the likes of which I had never seen. Yes that is right jet black! Finally Steven slipped a net under this unique specimen. While not as large as some catfish we caught and released this evening the color was incredible! 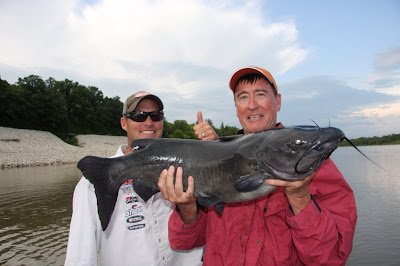 Now is the time to get out to the Red and Assiniboine Rivers if you want to catch a trophy catfish. Water levels have dropped and current has slowed to a managable flow. The area from Lockport to Selkirk is producing the best fishing.