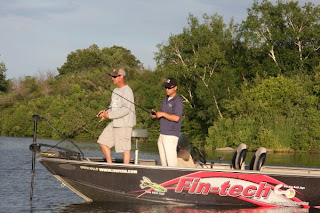 Don and Friends excellent fishing adventure!
It slightly overcast with a brisk northeast wind blowing when we arrived to launch the boat at Mary Jane Reservoir.
It had been a couple of years since my last visit to Mary Jane but reports indicated that both the largemouth bass and crappies were on the bite.
As we headed towards the east end were a small creek entered the reservoir we noticed that the water was heavily stained from all the runoff. Hooked Magazine (wwwhookedmagazine.ca) owner publisher Steven Wintemute dropped the front troll motor on his boat and we started working slowly up the creek, the water finally started to clear the further back we got. That’s when friend Darrin Bohonis got the first bite, a chunky largemouth slamming a swim bait he had just thrown out. After some high fives, it was back to business, this time Wintemute landing a bass on a bait the resembled a Cuban cigar. What about me? I was stuck in the back of the boat, content to dabble with some new swim baits I had bought and take pictures of these two highly competent anglers working the water. Not to worry, I decided to hop boats, checking in with long time friend and area resident Dino Branfield. Dino had a young friend and neighbor along by the name of Ryan Funk, a WHL hockey player and fellow who just liked to fish. Ryan was heading out the west coast, having been traded to Vancouver for his last year of Junior Hockey. This was to be his last fishing adventure before he got on the plane. 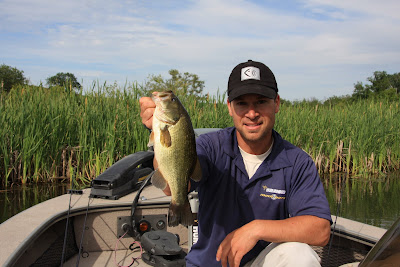 While luck would have it, the largies stopped biting as the sun set but the crappies went crazy. I caught all mine on small crankbaits while Ryan was whacking them on a jig rigged with yellow tail. While not monsters it sure made for a fun day with a couple of bonus walleye thrown in.
Located in southwest Manitoba near the community of Manitou, heavy rains from the week previous had not only rutted the boat launch but raised the level of this small reservoir substantially. 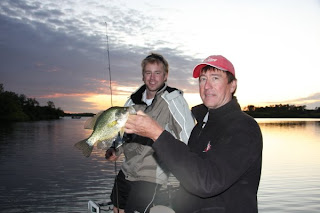 RECORD MANITOBA LARGEMOUTH
It was the third week in June in 2007 when Dino Branfield established the new Manitoba length record for largemouth in the province. On June 18th just before dark and right after an intense lightning storm, Dino hooked, landed and released a huge twenty-one point two-five inch jumbo largemouth. That is why this small reservoir is so unique. It supplies one of the only largemouth fisheries in Manitoba and that is why this fishery is catch and release only for the bass.
Mary Jane is a very small body of water but supplies a valuable sport fishery for anglers in this part of the world, with a small private campground on the lake, great for a little family adventure in southern Manitoba. You can find the reservoir by heading six kilometres west of Manitou until you come to a sign advertising the Archibald Museum. Turn north on the grid road for three kilometres and you will see a sign on your right hand side pointing out the reservoir. If you want to camp, you have to go over and get the keys to the campground at the Archibald Museum.