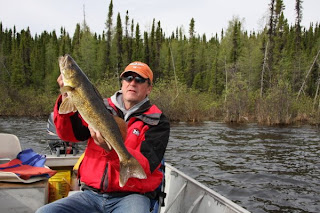 Day Two: Big Sand Lake Lodge
8 A.M. After a hearty breakfast of Red River cereal followed by bacon and eggs it was time to head out on a different lake. As it turned out the lodge had five boats on a smaller lake next to Big Sand. Called Katimiwi, this shallow lake was considerably warmer than the main lake. This was also to supply the best fishing of the trip.
9:30 A.M. Mark had the 30 h.p. Yamaha jet drive at full throttle as we headed to the east end of the lake. This day we found a bunch of hungry pike in a back bay which probably had the warmest water in the lake. It was a long finger which made fly fishing difficult with another angler in the boat. So instead Peter and I cast out different shallow running baits. I had on a swim bait, a hollow belly shad from Berkley. Rigged on Eagle Claw 5/0 3/16 ounce swim bait hook, it drove the pike crazy. This small bay, as it turns out, supplied the best pike action of the trip with one fish after another whacking our lures. Peter landed the biggest pike, a nice thirty nine inch fish from on a orange Mepps Aglia.
11:00 A.M In fact on day two of our visit I hooked a Master Angler walleye on my fly rod while fishing in a shallow bay for pike. This big walleye had my ten weight fly rod bent to the water. In fact it was one of the best battles I had ever had with this species. It measured slightly over twenty eight inches, a big walleye for this far north. Casting out my small brown streamer fly I immediately hooked another walleye. As far as I could tell, the fish were feeding off of blood worms judging by the number attached to the outside of the fish. In fact this was to be the pattern for the walleye on this particular trip. Loads and loads of walleye in less than three feet of water in mud bottom bays. 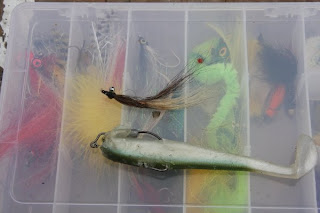 12:00 Noon We met up with the other two boats for a shore lunch on one of the many sandy beaches in this part of the world. As the guides prepared the fish, Larry spotted a timber wolf lurking through the trees. Unfortunately too many trees were in the way to get a good picture but this was not the last wolf we would see on this trip. When the fish was finally ready, it was gone in a millisecond. There is nothing like fresh walleye in the outdoors especially on a day that was a little cool around the edges. We made sure to tell the guides to cook more fish next time!
1:30 P.M Mark headed the boat north to series of rapids just a short drive from the shore lunch area. Fishing a small back eddie we hooked both pike and walleye, the action very steady.
3:00 P.M Mark decides to see if we can catch a big pike again in a large shallow bay off the main lake separated by a small channel. As we motor through the channel we hook two nice pike, one of the fly rod. With a medium wind blowing from the northeast, Mark shuts off the big motor in the shallow bay we start to drift. Casting a small shallow running crankbait, I get a vicious strike by a nice fat walleye. Mark then points over to a boil on the surface just a short distance away. Peter makes a cast over to the spot with the Mepps with no luck. I follow up with my crankbait and solid twenty five inch walleye engulfs the lure. After catching another dozen healthy walleye it is almost five p.m and time to head back for supper, a great day of fishing had in our boat. 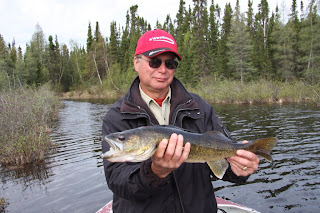