MY ADVENTURE TO BIG SAND LAKE LODGE: DAY ONE!
7A.M. It was seven in the morning when my wife dropped friend Peter H and I off at the Calm Air terminal in Winnipeg. Upon arrival I was met by Fred, the guy who makes this operation run smooth as silk. Since our bags were already tagged, straight to the scale they went, the last we were to see them until our cabin at the resort.
8 A.M It was time to hop on the ATR 42 – 300, one of a fleet of four brand new state of the art planes that Calm Air has purchased in the last couple of years.

With plenty of leg room and reclining leather seats it made for comfortable flight the 525 air miles to the lodge with a refueling stop in Thompson.
9:45 A.M.
As the ATR -300 circled Big Sand Lake, huge stretches of ice could be seen clogging the main lake. Most of the smaller bodies of water in the area were ice free but not the main lake. Seventy miles of this incredible fishery were going to be off limits to us on our five day trip to Big Sand Lake Lodge. In talking to camp manager Rick Bohna the ice was at least three weeks behind a normal year, this the latest year on record. As the plane touched on the long sand strip thirty seven guests filed off the plane wondering what was going to be in store for them.
10:15
After a pleasant walk from the landing strip to the lodge we entered the main lodge, a huge building sitting atop a sand esker. Here we were introduced to our guides for the trip and served breakfast. I was to be hosting as part of a Fish Futures trip auction. Larry Dewar from Winnipeg had brought three friends with him and we were to have plenty of fun with this group over the five days! 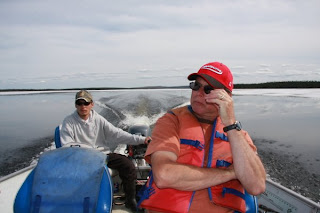 11:30 After assembling all our fishing gear we met our guides at the lodge for our first day adventure. Since the ice was clogging most of the main lake, we were headed back to the landing strip to a cache of boats the lodge had at airport bay. After a ten minute walk down the hill, we headed out to fish pike. Mark was to be our guide this trip, a young man full of energy and ideas. He had been guiding at the lodge three years under the tutelage of his dad, Edward, a veteran of fourteen years at Big Sand. The sun was shining and the temperature was a lot warmer than we had predicted, perfect spring pike conditions. As we fished a couple of different bays, I caught a few small pike on the red and white streamer that I was casting with my ten weight fly rod. Pete was chucking spoons and small spinners and was to hook the first larger pike, only to loose him.
2p.m. After flogging the back bays, Mark decided to head out to the main lake to meet up with his dad and the other two boats. That’s when things got a bit crazy. Ice was blocking access but with a little bit of hard work and ingenuity we were able to slide our boats over a small patch of ice and access a couple more bays . 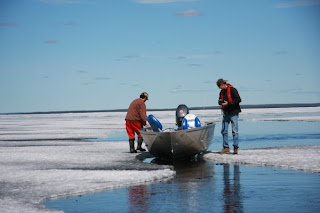 5 p.m It was time to head back in for dinner, with some more ice flows to be negotiated. We had caught some more pike but nothing really large had been landed.
8p.m After supper Mark asked if I wanted to head out around the corner from the lodge and fish a set of rapids that was holding walleye. Yes, of course was the answer. As we motored up to the rapids one other boat was positioned up in the faster water. Mark decided to take us further back to the end of the pool where the river channel turned back out to the lake. Marking the break on his Humminbird, we fished fourteen feet of water with small jigs tipped with Berkley Power Grubs. It didn’t take long for us to land the first walleye of the trip. 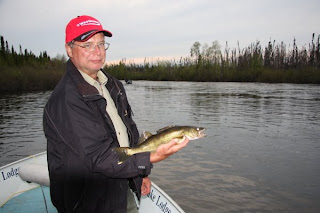 10:30 Time to get ready for bed and after a quick night cap we were soon asleep in a very comfortable bed in a very spacious cabin overlooking the lake. Wow, it doesn’t get much better than this….