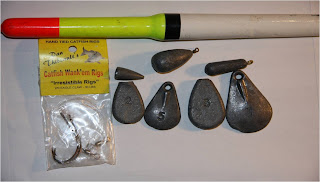 FLOATS FOR CATS
As I motored the boat into the channel, the Humminbird depthfinder showed an incredible series of dips and peaks. Off to the side I could see swirls on the surface. These were NO ordinary ripples, but large mini-whirlpools, a sure indicator that big catfish had the feedbag on. Anglers were lined up along shore, casting their baits into the current flow. Heading upstream to the middle of the channel, I dropped anchor on top of one of the peaks of jagged rock, my Humminbird 997 C indicating six feet. Just to the back of the boat the depth dropped right down to 17 feet. I knew that if I was to drop down a standard catfish rig it was sure to get snagged. Instead I had brought along a number of extremely large slip floats, the ones sold for dead baiting pike. Rigging up, I threaded my 20 pound Berkley Big Game Hi-Vis Solar Green line through the top of the bobber, then out the bottom, adding a line weight, then large coloured bead on the line before tying on my terminal tackle. This bead would act as a buffer between the weight and my knot.
Then I tied on the terminal tackle, using a large swivel, and about a sixteen inch snell to a 2# hook. On this hook would be threaded a piece of cutbait, either goldeye, sucker or tullibee. After tying on a heavy piece of line in an overhand knot above the float I was ready to go. This would act as my bobber stop!
Setting the stop at about four feet to begin with, I cast upstream, letting the bait drift with the current. Sure enough after about five minutes, the float was violently tugged beneath the surface and the first catfish of the day was on!