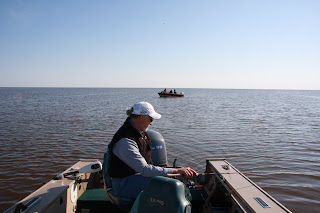 Three pontoon boats were tied to a series of docks near the boat launch at Lynchs Point, a sure sign that the fishing and boating season was in full swing in southern Manitoba. As I backed my friends boat down the cement launch pad, the adrenaline started to pump. It was the start of a new fishing season, the sun was shining and hopefully the fish would be biting, so how could you not be excited. As Jim Price and I headed down the channel into the Whitemud River, shore anglers were lined up at the campground near the mouth of the river as it empties in Lake Winnipeg. Taking a wide path around them Jim motored out into the very mouth of river, checking for fish on his depthfinder. Marking a few scattered fish, we decided to drift fish with a jig along the edge of the main river channel. Soon we were joined by a couple of other boats of young anglers. The first anchored a short distance away from us, while the other trolled back and forth. As we drifted by the anchored boat, I had my first bite of the day. I was fishing the new Berkley Gulp Hollow Bodied Swim Bait in the five inch split tail shiner pattern. A nice chunky eating size walleye had whacked the bait and we had our first eater in the boat. A short time later we heard shouts of excitement from the anchored boat. The young angler in the middle was a fighting a sizable fish judging by the way his rod was bent over, his partner in the front of the boat grabbed a net. Anticipation was high from all the boats in the area as an intense tug of war continued. Finally a big walleye surfaced to be scooped in the boat. After a quick measure (thirty one point five inches) a couple of pictures, this monster walleye was released back into the river. A couple of drifts later Jim and I decided to drop the anchor in the main river channel in hopes of catching a few more fish. Twenty minutes without a bite made us change game plans once again. Tying on bottom bouncers and spinners we started backtrolling against the current. A couple of minutes later Jim set the hook on a substantial fish but unfortunately for us the fish gave one big head shake and was gone. It was my turn next, a big bite, a fish on briefly, then lost. Then conditions started to change dramatically, the wind switching from the south to northeast. Fighting boat control it was time for a change in tactics. Tying on Berkley Flicker Shads we started trolling back up the river. As we rounded the first bend, Jims rod loaded up in the holder under the weight of something extremely large. As Jim fought the fish I took over the control of the motor, backing up the boat just a little bit, turning it sideways so Jim could be in the correct position to fight this fish. Sure enough, a huge walleye could be seen with the crankbait stuck sideways in its mouth. Jim had brought his non tournament net, a little rubber affair. While I waved at the fish, it decided to go straight under the boat. Jim was quick to react, keeping the rod away from the gunnels. Back and forth, up and down went the walleye, putting up one of the best fights I have ever seen from this species. And I have seen a lot of big get caught! Finally Jim got the fish once again to the side of the boat. I managed to get the head of the fish in the net but the tail was sticking out the back so Jim reached down and grabbed that and between the two of us we managed to haul this monster into the boat. Jim quickly measured the fish at thirty two inches, then held it up for a few quick pictures. As he released it back into the waters of the Whitemud we both enjoyed the moment. What a way to start the fishing season! 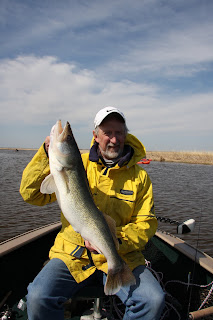 As the day went on, we travelled up and down the river, trying a variety of different spots, enjoying the day and talking to a number of anglers who were out. Many were family groups on pontoon boats but my favourite was the father/son team that were in separate plastic kayaks fishing from the weeds. At one bend about a kilometer from Lynch’s Point, there were a number of boats pulled up to shore fishing for silver bass or freshwater drum. Using worms fished on pickerel or live bait rigs the action for these scrappy fighters was non-stop. This type of fishing is great for the young or beginning angler.