Piking in the Interlake 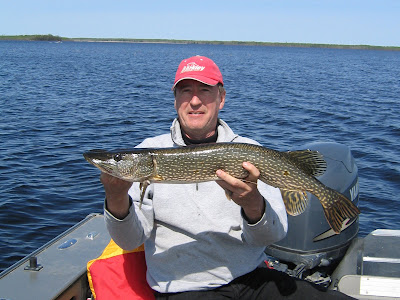 It was a bright, beautiful day as we headed up Highway #7 to Teulon, then left on Highway #17 that splits the Interlake into two sections. We headed north through Inwood, past the Narcisse snake dens, stopping in Poplarfield to get an ice cream cone, then continued on #17 all the way past Fisher Branch until we hit Provincial Road #325. Now on gravel, we headed straight west for 16 kilometres until we came to Davis Road. Here we met up with another truck full of anglers with a boat hooked on the back looking for directions. As we pulled up beside them I indicated that this should be the correct turnoff, even though there was no sign. Turning north on Davis Road we drove until we saw a campground sign about 4 kilometres later. Turning left, we followed a winding gravel road for another 22 kilometres until we came to our destination, Mantagoa Lake, pretty much in the middle of nowhere. There were four boats on the water already when we launched on this small picturesque body of water. As we slowly trolled away from the dock, my depthfinder indicated an average depth of around two and half metres, obviously a very shallow lake as well.
We rigged on a couple of lures that I knew would dive about one metre, Berkley Frenzy 3 ½ inch Firesticks. Two minutes into our first troll I had a fish on, a nice fat and sassy northern pike. This kind of action for pike was to continue all day long, no matter where we fished or what technique we tried. These fish were on the bite and anything that moved was taken with a vicious strike. We kept a couple fish for supper that evening and while cleaning them we found their stomachs jammed full of perch. We had tried various locations and techniques for walleye with no luck. In the evening as took our boat out of the water some local anglers were just heading out. 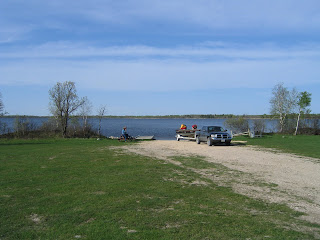 From the nearby community of Inwood, they were camping overnight at the unserviced campground at Mantagoa. Your leaving too early, they told us, the walleye don’t start biting until the evening on this lake.
And you know what, they were probably right. Mantagoa is stocked every year with walleye and according to local conservation officers with whom we talked to, the last two years have been very good for this species. On this trip, the walleye won, but the pike fishing more than made up for it.