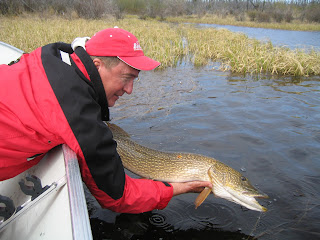 THE EARLY SEASON PIKE OF NUELTIN LAKE
To have the chance to catch a really big pike, one that breaks the magic 50-inch barrier (127 centimetres) has been a dream of mine since I started fishing professionally. My most memorable experience with these big creatures came when I visited Neultin Lake Lodge as guests of Gary and Shawn Gurke a couple of years back.

This lake one of the most exciting trophy destinations in the world. Given the fact that the lake is close to 170 kilometres long, interspersed with shallow bays that are prime pike habitat, your choices and chances to see and catch big fish are only limited by the time that you have to fish them. Two days was all I had on this particular trip to try and catch the monster that I have always hoped for. In order to make my task a little easier, Shawn had supplied me with Guy, one of Nueltins veteran pike guides.
With the ice still on the main lake, we were still limited somewhat were we could go but there were enough dark bottom bays in the south end of the lake to make the two days an exciting challenge. The first day we tried a couple of bays on the east side of the lake, relatively close to the lodge. In the second area we spotted a number of huge pike laying right on the bottom, including one that looked like a submerged submarine. It was so large in fact, that I knew this fish was well over the magic number.
EASY TO LOCATE
Finding the fish can be relatively easy at this time of year. The pike are in the back bays on the nice sunny days looking for the warmest water available. Spawning for most of the fish had just finished and some of the big females in this bay were still recuperating. I caught smaller males in this area, the bigger fish totally disinterested. Since it was Guy’s first day on the water as the camp at just opened we headed across the lake to the west side and a large river that had huge shallow bays. Heading up one long creek I stood in the front of the boat peering down off of the casting platform in search of pike in the relatively shallow clear water. Sure enough as we got further back up the creek arm, long shadows were visible, the odd swirl indicating that one of these large fish had been disturbed by the boat’s intrusion. Getting the fly rod ready, I started false casting, measuring the distance out to the weed edges on either side of the creek. Laying a black bunny streamer out on the edge produced a viscous strike from a decent sized pike. Some twenty fish later we still hadn’t produced a fish over the required 104 centimetres or 41 inches that is required for a Manitoba Master Angler. Somewhat puzzled, because we had seen bigger fish swimming by, I switched over to smaller yellow streamer. First cast, I could see a big pike twist its body and move up to the fly and with a snap of the jaw I had my first trophy of the trip on.
After a nice battle on my nine weight Fenwick fly rod, the fish was put in a cradle, the fly gently removed. While in the cradle the fish was measured at 106 centimetres, a picture taken, then quickly released. 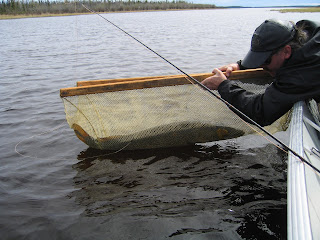 The change of colour to the yellow along with a downsizing of the streamer fly had the desired result. Two casts later an even larger pike screamed out of the weeds and slammed the fly, taking it out to the middle of the creek in a smoking forty metre run. My guide backed the boat out to the fish and after another excellent fight a slightly larger pike was released. This continued on for another two hours, big pike after big pike slashing and dashing at my poor yellow streamer until it was a streamer no more, the marabou shredded and lost. As the time came to go back to the lodge, three master angler pike had been released but none came close to the magic 127 centimetre mark (50 inches). Just to tell you how difficult a task it is to catch a pike of this size, look at the Manitoba Master Angler book from this past year. There were only two fish that size recorded. One, however, set the new Manitoba length record. It came from Apisko Lake and measured 153.67 centimetres or 60.5 inches, a true monster. Gary Weber from Minnesota caught it on the 26th of May 2004. So at least I knew I was in the right time frame to catch a true record fish. As mentioned I had seen at least one fish that seemed certain to fit the requirements. As I rolled out of bed for day two, rain clouds had rolled in along with a nasty cold front that seemed certain to shut down those shallow fish. Indeed it seemed that way, as the first two pike areas we visited were desolate. We decided to fish for lake trout that 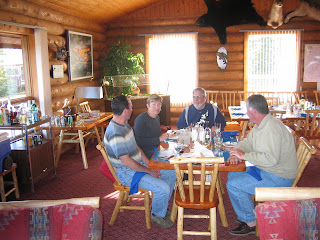 morning in hopes that the weather would get a 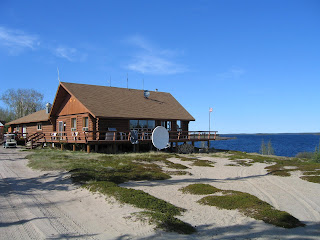 little nicer for the afternoon. After a shore lunch of cajun blackened lake trout we returned to the small stream in which we had done well the day before. As we motored back, the overcast conditions and the black bottom made it almost impossible to spot fish. Still, I was confident that I had found the fly that the fish were interested in. I had downsized once again the size of streamer I was using. This time I had on a small orange saltwater fly that Brian Chan of Kamlops had given me some years ago while fly fishing for lake trout on Great Lave Lake. Salt-water flies are a good choice when fishing for large pike because of the heavy duty hooks that they come with. Sure enough on my first cast I had a nice pike dart out of a weed edge at my orange fly. I was stripping this particular lure in quick darts to keep the hook from picking up the moss from the bottom. As we moved to the back of the stream to a small pool it happened. A moment earlier I had seen a huge puff of mud caused by a large pike that had been spooked by the boat. I don’t know if this was the same fish but a monster pike appeared from nowhere, opened a mouth that could swallow a goose and took my fly that was the size of a small minnow. Taken off guard, I hauled my fly line down to set the hook and keep pressure on the fish. All seemed under control, as the magnificent pike assessed the situation. While he was figuring out the game, I started to try and pick line back up on my machined fly reel. Just about that time this pike figured it was time to exit stage right. Unfortunately as he was doing that my fly line looped around my reel. Ping, went the line, what was left shooting back into the boat beside me. I figure I had caught about 70 pike previous to this without losing any of the larger fish. Why do the really big fish always seem to get away? To me, that’s what makes us always come back for more.
For a trip of a lifetime, visit their website at http://www.nueltin.com/