I am looking forward to putting the boat in the water in the next couple of weeks. Though it has been a late thaw, frozen and open water action is improving at a rapid rate as the days get longer.
For those of you looking for open water fishing action, some of the launches on the Rainy River in Northwestern Ontario and Minnesota have cleared in the last week. If you want up-to-date information visit the www.clemenstonresort.com website. They have daily updates on ramp conditions and fishing success on the Rainy River. On a trip a few years ago I discovered that there is a first class boat launch in Fort Francis, that is the first to open on the river. It was on a Easter weekend that I headed down, launching the boat at the ramp in town. Having never fished that section of the river, a friend and I slowly headed down river a few kilometres in search of pre-spawn walleye. Using jigs and minnows we caught and released 22 walleyes that day, the largest 70 centimetres. It’s always a trip worth making but make sure you dress warm, you never know what the weather is likely to bring. I can remember on this particular trip getting a beautiful, hot sunny day the first day out, 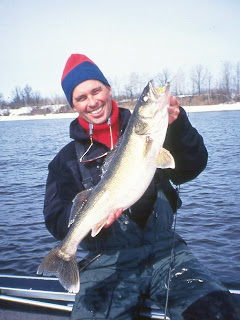 then the next morning faced with snow squalls and a nasty windchill. The forecast for next week looks great though with highs in the double digits. If the water clarity in the Rainy River stays relatively clear you can drift fish the edge of the main river channel with that jig and minnow combination. We have had some tremendous success for big fish using a Northland Whistler jig tipped with a huge live chub. A large profile bait at this time of year won’t hurt. When the fish are on, big bait will get big bites! Don’t be surprised if you hook a sturgeon while fishing for walleye in the Rainy. There is a tremendous population in the river now and if you want a break from the walleye fishing, one of the best places to try is at the dam below Fort Francis were the boat launch is. Anchor and throw down a jig or rig with some big minnows and you will get hooked up in no time. Look to mark fish on the edge of drop-offs in the main river channel. You might catch some big walleye at the same time. Anchoring and jigging is especially effective in real cold water when the weather is unstable and the bite is off a bit. It also works when the water is dirty. On another trip to Rainy a few years earlier heavy rainfall combined with a fast melt had swollen tributaries that flow into the river, making the water the colour of chocolate. The day before when the water was still a decent clarity we had been able to slow drift with the front troll motor, catching some decent walleye on a small jig and minnow. The next day with increased flow and muddy water that presentation was just not cutting it. A change in tactics was required which meant dropping the anchor on a like looking spot and making your presentation to the walleye as big as possible so the fish could find it. We decided to anchor out of the main current, on the side of a little flat area off the main river channel. I tied on a one ounce orange jig, then slid a six inch Berkley power lizard up the shaft all the way to the head of the jig. Onto this I slapped on a nice fat chub and dropped it on a short line to the bottom in some three metres of water. Thump, thump, thump went the jig. The whack came a short time later as a good walleye smashed into the jig and bent my rod over. It had taken a little time for this walleye to find the bait in the dirty water but the wait was well worth it for all as a monster Rainy River walleye came to the side of the boat and was quickly released.
While we didn’t catch huge numbers of fish that day, we did as well or better than most anglers on the river. We simply worked over the one area that was holding fish by starting on a short anchor, then letting out rope in two metre increments to cover a little bit more area. Given that I had an extremely long anchor rope we managed to cover most of the flat we were fishing without having to lift the anchor. By slamming heavy jigs on the bottom, and by using large plastic we were giving the fish a chance to find our baits. This is something to consider if you decide to fish the Red River or some other tributary on opening day and find dirty water conditions. I will certainly have some four and seven inch Berkley Gulp minnow worms in my arsenal this season when I hit the water. Their bulk and the twister style tail should provide some extra action to the bait, allowing those walleyes a little easier time to zero in.