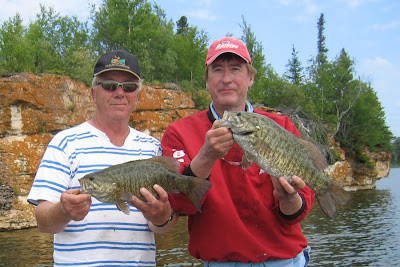 Smallmouth bass in northern Manitoba? Yes, despite the harsh winters, this adaptable species has done well in many of the lakes that they have been introduced to in this part of the world.
On a trip to four years ago to The Pas and area, not only did we catch numbers of smallmouth bass, we caught extremely large fish as well.
Bradley Lake, is one of a number of lakes in this part of the world that has seen the introduction of smallmouth by Manitoba Fisheries over the last few years. While not all of the lakes have been success stories, this one definitely has established a reputation as one of the top smallmouth lakes in Manitoba. Originally overrun by stunted northern pike, Bradley was stocked in the early 1980’s. Soon after the smallmouth introduction, the pike population stabilized with a reduction in the smaller fish, a balance that has remained over the years with a nice ratio of adult fish in this small lake.
Located on the west side of the road at Mile Nineteen on the Moose Lake Provincial Road three-eight-four, Bradley Lake is a bass anglers dream. There is no name sign on the access road, so zeroing your trip odometer at the start of the Moose Lake Road is a good thing.
Friend Rick Hubbs was along to ride shotgun, a man who counts this lake as one of his favorites. He has spent countless hours trying to outsmart these bass and probably knows them all by name by now. Also along on this bright sunny late June day was Rotary Exchange student Felipe Campos. All the way from Brazil, Felipe had just graduated from Grade Twelve in The Pas as part of a year long exchange in Canada. As a graduation gift Rick was bringing Felipe along to catch his first smallmouth bass.
Felipe was at a definite disadvantage though, he did not like putting on the ribbon leeches on the small one eight ounce jig that Rick had rigged for him.
That meant that Rick caught the first smallmouth, then the second one before Felipe even got his lure wet, a tough lesson indeed. Yet, by the end of the day, he almost had it figured out, and yes he did catch a smallmouth just two centimetres short of a master angler.
As was fitting for the day, Rick caught the largest smallmouth trolling his black one-eight ounce jig and leech combo, a nice wide forty-eight centimetre beauty that was hanging around one of the many weed beds this lake features. My jig supply did dwindle that day given that the pike were never too far away. In order to try and combat that, Rick had tied on a heavier mono leader to prevent some of the bite-offs but that wasn’t always foolproof.
Our total for the day were five smallmouth over forty five centimetres plus fish in all size ranges, an excellent indicator that the fishery is healthy. 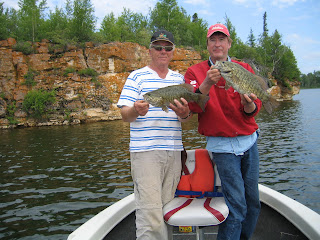 Bradley is not the only lake in this part of the world that is producing some excellent smallmouth action, Rocky Lake has seen a resurgence of fishing in the last three years.

Labels: smallmouth in the middle of nowhere