Planning a trip north to enjoy some spectacular trout, walleye and pike fishing during the month of April? One of my top choices at this time of year are the lakes and rivers around The Pas, Manitoba.
Four years ago I had chance to enjoy the spectacular walleye fishing in the Saskatchewan River right in the town itself. On my trip I was able to get out for an evening with local angler Dale Kerwin. We unloaded our snowmobiles right in town and headed west to the mouth of the Carrot River, one of the numerous tributaries that supply water to the Saskatchewan. After drilling a series of holes right at the mouth dropped our lines. Soon I had some activity on my stationary line. A twitch of the rod tip indicated there was some interest. Taking the rod out of the holder, quick up and down of the jig produced a viscous strike. Soon a small northern pike stuck its snout out of the hole to be quickly released. Two more and a sucker followed in succession. Later that evening we were joined by two local anglers, who took us to one of their secret spots a short distance away. Sure enough as the sun started to cast long shadows the walleye became active. Ice fishing for walleye and pike is excellent in this section of the river at this time of year as more and more fish move upstream to the Carrot River, a main spawning area. Many of the fish are coming out of Cedar Lake. Genetic sampling has proven that the walleye from The Pas, Cedar Lake and Cross Bay are from the same pool. Cross Bay remains open at this time of year and more anglers each year are heading up to try the spectacular ice fishing for both pike and walleye on this huge bay. 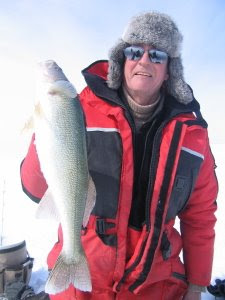 Barbe Lake is about seventy kilometres north of The Pas, up Highway 10, past Rocky Lake then left at the Sturgeon Landing road for about five kilometres. There if you look really hard you see a small sign peaking out of the bush on the right side of the road “Barbe Lake”. Recently friend Dave Colibaba visited this spectacular trout fishery and wasn’t disappointed.
He and a friend caught some master angler rainbow trout as well as one brook trout by just walking onto the ice by the boat launch. The southwest end of the lake has extensive weed flats while the northwest end has deep water with sharper drop-offs. The middle of the lake is a good bet at this time of the year, providing a balance in structure. 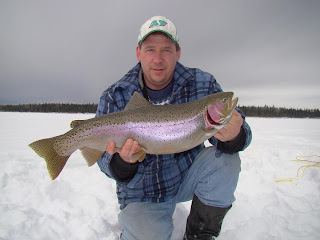 Finally, don’t forget about mighty Clearwater Lake, just a short drive north and east of The Pas. At this time of the year you can get some of the best fishing of the entire year. Last time up north on the lake I headed out by snowmachine with Rick Hubbs twenty kilometers to the northern end.We were fishing a shallow bay that averaged seven metres in deep. Hubbs said this particular bay held a wide variety of shallow forage, attracting larger lake trout to patrol the bay. Drilling off the end of a shallow reef, on this day Rick and myself caught five nice lake trout right in the middle of the day. Unfortunately I had to leave in the early afternoon to get back to Winnipeg. Hubbs says the best action for lake trout at this time of year is from 6:30 to 7:30 in the evening. We caught lake trout on a variety of techniques both with stationary lines and with jigging small spoons tipped with a minnow.