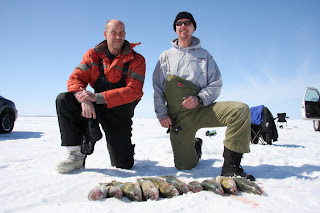 The sun was beating down on the surface of mighty Lake Winnipeg, trying to penetrate the four feet of ice and snow that covered this immense body of water. Across this section of lake near Hecla Island, vehicles, snow machines, and ATV’s were scattered everywhere, a testament to both the quality of the fishing and the beautiful weather. It didn’t hurt that conditions allowed anglers to drive pretty much to any location they wanted to without fear of getting stuck. As the ice fishing season drew to a close on the southern section of the province (with a general closure until the tenth of May), people wanted one last shot at a fresh feed of walleye. I was out this past Monday with friends Bryan Gray and Phil Brake, both of whom were enjoying some time off due to mid-term break. Phil is an art teacher and Bryan was supposed to be on holiday in Minnesota but flood conditions had put a damper on that trip. So what better way to celebrate than to enjoy the tremendous fishery that has been fueling the dramatic resurgence of the ice fishing industry in this province. Families were evident everywhere this particular day, and the sounds of happy whoops and hollers made us so appreciate what this fishery has meant to both the commercial and sport fisherman who fish this incredible lake. 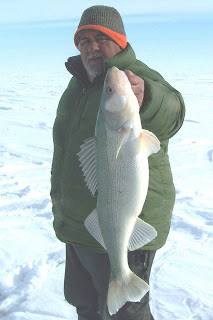 The last two years has been the golden era for walleye harvest on this lake. Nobody knows how long it can last but many have come to appreciate the bounty and the benefits it has provided to the province. Lee Nolden owns Gods Lake Lodge on Gods Lake in northern Manitoba. In the wintertime he and his family live in East St Paul. For years Lee guided in the north until he was able to purchase the lodge a few years ago. During the winter Lee spends a hundred days ice fishing on Lake Winnipeg. Lee was along with us this day and in conversation about the lake, he mentioned that he himself had landed twenty two Master Angler length fish this winter. He also had a personal best walleye this year, a fish that weighed in at fifteen pounds. Lee has certain theories about the fishery, believing that to consistently catch those large fish, you need to be out in a bit deeper water, somewhere in the fourteen to fifteen foot depth. His favourite baits for big fish are Buckshot Rattle Jig from Northland, Jiggin Rapala and Rattlin Raps, all of which are tipped with a bit of shiner minnow on the bottom or trailer hook. While Lee has fished many sections of the south basin of Lake Winnipeg, all his trophies the last two years have come out from the mouth of the Red River at the southern end.

Labels: Hot Fun on the Ice