A group of American anglers were lined up on the dock of Adventure Air in Lac du Bonnet, the turbo otter having just arrived to take them to an outpost camp on the east side of Lake Winnipeg.
Thousands of anglers from far and wide come every year to Manitoba to enjoy some of the incredible fly in fishing operations that this province has to offer. In conversation with this group from Minnesota and South Dakota, it was to be their first trip to this part of the world. They had heard of the great fishing in Manitoba from friends who had been previous years.
I was along for the ride, but with a different destination in mind. I was going to continue on to Amphibian Lake Lodge to meet up with U.S Outdoor writer Jim Crowley. Shaun Jackson, the owner of Amphibian was our pilot this day, one of a growing group of young Manitoba born lodge operators. 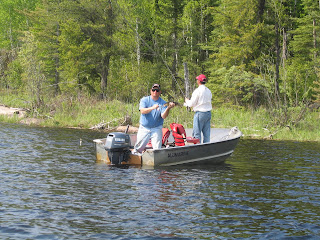 Amphibian Lake Lodge is located 150 air miles northeast of Winnipeg and 110 air miles north of the Adventure North air base in Lac du Bonnet. Amphibian Lake is a widening of the Pigeon River just a short boat ride from Shining Falls. This incredibly powerful and beautiful set of rapids is the start of one of the best whitewater rafting and kayaking rivers in this part of the world. It’s one of a chain of rivers that flow west into Lake Winnipeg from the Atikaki Wilderness Park. With great water flow all year, this river also offers fantastic fishing throughout the season. A special feature is the wide variety of fish species available, including trophy walleye and northern pike, whitefish, goldeye, sauger and perch. 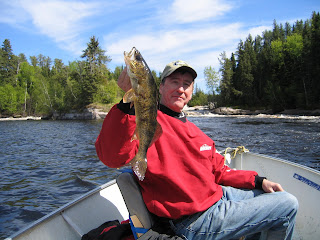 I got to appreciate the ruggedness of the landscape on the flight up to the lodge; the number of rivers and lakes that dot the landscape here on the east side of the Lake Winnipeg, almost too much for a hardcore angler to stand.
It’s this diversity and limited access that makes this part of Manitoba a truly amazing fishery.
What really stumped me though, was despite the fact we flew right over the lake in order to circle and land into the wind, I never saw the lodge until we were on the water. Nestled back in the trees the tip of an island on the Pigeon River, the main lodge was only visible from the water.
It was to be home for the next two and half days as we sampled the fishing this part of the world was famous for. Since Jim Crowley and another fellow from Midwest Outdoors were on a big pike mission, I got to spend time in the boat with camp manager Omar Vincent. I had meet Omar years earlier on the Winnipeg River at Pine Falls were he makes his home. After a half-day of fishing for both pike and walleye, we decided that the walleye were “on” and the big pike were not. A definite lack of new weed growth seemed to have scattered the pike, while the walleye were almost everywhere, though we found the majority relating to rock points off of islands and moving water.
What made I even more interesting was the fact that most of the walleye and pike that we caught were no where near the bottom. The fish on this trip were actively roaming for small minnows and other invertebrates that were moving up through the water column. While it made them very aggressive, you also had to get the bait at the right level!
The only time that changed was when we took the boat ride down to Shining Falls. The walleye were in the standard early season spot, the back eddies below the main flow as it shot down the falls from Family Lake next door. While we caught numbers of fish here with a jig and powerbait, we found the larger female walleye had moved out to an adjacent bay from the rapids. By trolling shallow diving crankbaits off the bottom, we got into some beautiful fish. It was interesting how these fish were relating to the structure and the current, a pattern that can produce year round. The area we found the fish was just before another narrowing of the river into a chute; a term hardcore anglers call a flush area. By trolling before the neck down in the medium light current, we caught one fish after another with a sweep and drop of the rod to slightly change the speed and action of the crankbait. Both of us fished the lures with a small black leader, given the number of hungry pike that wanted in on the action as well. I used a shallow and medium diving Frenzy minnow depending on water depth, and Omar ran a small Shad Rap. Interestingly enough was the biggest walleye we caught on this trip, a 27 inch walleye was almost totally grey and blue in colour. I would have to say it was one of those fish you see in pictures and read about with one chromosome short of a full deck. Well maybe not, but it was sure distinctive! 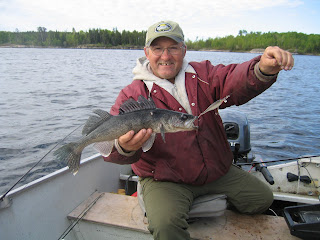 After a couple of hours here, we made a trip south west off the main channel to Hangar Lake, a great early season walleye and pike factory. Given that the average depth was about four metres. Omar weaved his way expertly through weed beds and around reefs to a rock wall that had a little better average depth coupled with s sharper drop.
Casting out a small blue and white shallow running Rapala, he put on a clinic of catching one big walleye after another. Since the shoreline was one of the rockiest in the lake, these were probably post spawn fish still feeding near a shoreline spawning area. Whatever the reason it was one of the highlights of the trip.
While down in the region we checked a couple of Omar’s bear baits. After beaching the boat and investigating the barrels, there was no doubt they’d been hit by more than one visitor. The next evening Jim Crowley visited one of these baits and got his first Manitoba black bear.


----------------------------
Notes:
Amphibian Lake Lodge was constructed in 1989 and is a four-star, full-service American plan lodge. Having a capacity for sixteen, each of the four private guest rooms has four individual beds and a three-piece bathroom. The common dining area and living area is where you will enjoy delicious home cooked meals and later relax and share all of your favorite fishing tales, or enjoy your favorite sports event on the satellite TV.There is also a large outdoor gazebo where you can enjoy a mid-day shore lunch or an evening BBQ while viewing an incredible northern sunset, Never mind the incredible fishing!. 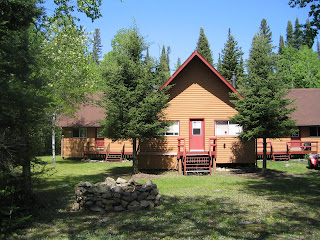