An Oasis on the Ice 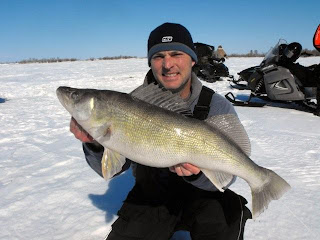 Ice fishing in March in Manitoba can be one of the most exciting times of the year.
Those thoughts along with images of big fish were filling my mind as I headed north up the west side of mightly Lake Winnipeg. Along for the ride was good friend Steven Wintemute from Hooked Magazine. As we drove up Highway Number Eight past Gimli on our way to Riverton, we reminisced about our trip a year ago. It had been the trip of a lifetime, a one day slam fest, walleye ice fishing that had been out of this world! While we were a couple weeks earlier this year, the weather forecast did not look too bad. Not only that, we also got to stay at Hecla Oasis Resort, a five star paradise just a short hop from where we were fishing. Meeting up with friend Murray Olafson, I climbed on a snow machine and we headed down the Icelandic River that empties into the big lake. Here we meet up with a couple of other friends who had used the plowed road to access the middle of the bay. Loading up everything in two large sleighs we had behind our snow machine we continued on to explore this vast untouched fishery. After another bumpy ten minute ride we started drilling holes in six feet of water. Sure enough, there were still walleye in the lake and by the end of the day five of us had managed to land close to sixty fish. While not nearly as productive as a year ago, Murray reminded us that with the winter we had experienced, we were still two weeks behind in conditions from 2008, a critical factor in determining the number of fish in this particular area. 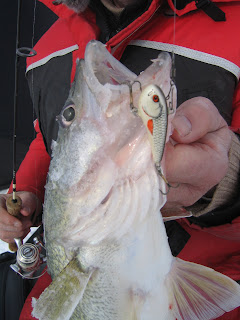 What was the same though, was the presentation required to catch these Lake Winnipeg walleye at this time of year. If you used a still line, you didn’t catch fish. These walleye had to be tricked into biting which meant a either a Chubby Darter from Salmo or Rattlin Rap from Rapala. I am sure it is no accident that both trophy fish caught a year apart were on the same bait, a Rattlin Rap. Last year Murray caught a thirty one and half inch brute on a fire tiger Rattlin Rap. This year Steven Wintemute returned the favour, slamming one just over thirty once inches on a blue and silver. It seems these big aggressive fish will not waste their time over something small and insignificant, a valuable lesson to be learned for sure at this time of the year when big fish are on the move. 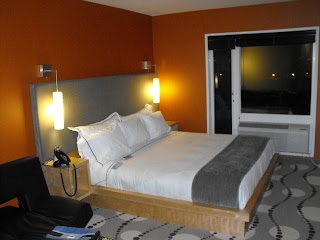 In the end we caught plenty of fish, the weather was fine and the solicitude out there magnificent. The experience was certainly enhanced at the end of the day by coming back and putting your feet up at one of the finest resorts I have ever stayed. My one regret on this trip was with the long hours spent on the water, we didn’t get to experience all the luxuries this hotel has to offer. For more information on the resort visit their website at www.heclaoasis.com. 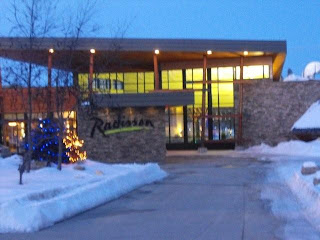