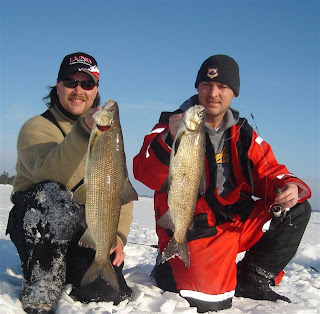 Situated in an ice tent on Shoal Lake, Ontario I could watch the underwater world unfold below me on my Humminbird Ice 55 flasher. Friends and I were fishing an extended point off one of the myriad of islands that dot this eastern section of the lake. As I bent over the flasher I could see a fish streaking to my lure, a blur of blue on my five colour display. As soon the two intersected I braced for the bite. Sure enough my rod tip dipped enough to indicate that this fish had committed. Setting the hook I hung on for what I knew would be a hard battle from another jumbo lake whitefish. Streaking and darting this fish gave me everything I could handle on the tackle I was using. Shaped like a bonefish my four pound fireline was taxed to the limit with my medium light ice fishing rod bent over right to the hole.
TREMENDOUS SPORTFISH:
Lake whitefish could be the most spectacular ice fishing quarry that we have access to in Manitoba and Northwestern Ontario. Preferring cool clear water lakes with water depths in the twenty to fifty metre range, the lakes of the Canadian Shield make for prime habitat. These aggressive winter predators, though, are also more adaptable than the lake trout, tolerant to warmer water temperatures. This expands their range to a wide variety of lakes in this part of the world. Hard to catch? Not in the least, as long as you keep a few certain rules in mind.
LOCATION:
In the wintertime, whitefish can be found in a wide variety of locations.
On this particular day we keyed in on two different areas. One was an extended point off a main lake island that dropped into deep water. Whitefish love transition spots between hard and soft bottom, preferring to feed off either insect larvae or small minnows in the winter. Mid lake shoals and extended soft bottom flats also provide forage opportunities for these fish. In fact, on the first location, we found some beautiful hard fighting lake whitefish on a twelve metre sunken island that was also holding perch. 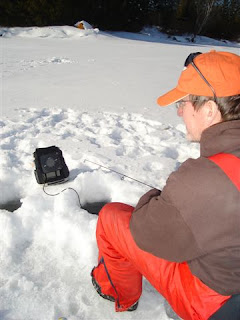 I started by using a small Eye-Dropper jig by Northlands Tackle tipped with a small white one inch Berkley power grub. Once I lifted my lure off bottom I could see about five marks rising behind my bait. As it turned out these were small perch, a good thing when looking for whitefish. As I reeled up my lure to the ten metre depth, I could see a single green mark streaking up after my bait. Holding my lure steady, then giving it a slight twitch, was all that was required to elicit a vicious strike from the first whitefish of the day.
PATTERN: Almost all the whitefish caught that day came using the same technique, by dropping a lure to the bottom and reeling halfway up the water column. This would cause the whitefish to streak to the lure and slam the bait. Using electronics sure helped but is not an absolute necessity in this type of fishing.
LURE SELECTION: Small silver spoons like the Williams Ice Jig, and the Northlands Eye-Dropper work well. Small jigs with Berkley one inch power tubes or two inch power grubs are also excellent producers. We also had excellent success tipping a one-quarter ounce jig with a Berkley two inch Realistix Minnow in chartreuse and glow. A small jigging Rapala can also be deadly along with Cicada’s. An aggressive jigging action with artificial lures will call whitefish in from a distance, important considering that they can be scattered over a fairly large area.
If the fish do get finicky, rigging up a small hook below a couple of split shots with a dead shiner minnow can get you some jumbos as well.
The use of a hydrographic map, if available, will allow you to find in advance areas that are likely to hold whitefish. Since larger whitefish are usually very aggressive in the winter time, it won’t take long to determine if there are fish in the vicinity.
As the days get longer in March, whitefish tend to get into larger schools with fifty to hundred fish days a real possibility.
Winter roads crisscross Shoal and we accessed the lake via the Clytie Bay Road which extends off the Rush Bay Road. Slush this year and poor maintenance of roads means a four wheel drive vehicle is required on this section of the lake.
MANITOBA WHITEFISH LAKES: North Steeprock Lake in the Porcupine Hills is absolutely loaded with lake whitefish. Westhawk and Falcon lakes have abundant populations as does the entire Winnipeg River system, especially the Nutimik Lake section.
In the Duck Mountains many a master angler whitefish has come through an ice hole in March from Gull Lake. Cross Bay up at Grand Rapids, has huge lake whitefish which can grow to size of thirty inches or better, a challenge to any ice anglers equipment. Don’t forget Clear Lake in Riding Mountain National Park, a spectacular lake whitefish fishery. Not to be overlooked as well are the eating qualities of this fish !