Marketing Manitoba in the United States 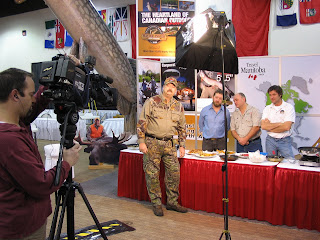 Manitoba has some of the best hunting and fishing opportunities in the world. Despite those attributes with some tough economic times in the United States it is sometimes difficult to continue to attract clientele to come to enjoy what Manitoba has to offer. Kevin Palmer, who manages the hunting and fishing marketing strategy for Travel Manitoba knows this is not the time to pull back in marketing efforts to the United States. Palmer unveiled a new initiative at the All Canada Shows in Minneapolis, Chicago and Milwaukee this past month that centred around a new theme “Manitoba Monsters”- a reference to the abundance of trophy sized northern pike and large game.
To reinforce the point the new Travel Manitoba booth featured an imposing twenty foot inflatable replica of a pike to attract attention. . “I saw young kids dragging their grandfathers to our booth so they could get a closer look at the giant fish,” said Kevin Palmer “The adults ended up spending time at our booth and walking away with Manitoba literature.” In both markets, the special TV exposure was part of larger broadcast ad campaigns that included a raft of “Manitoba Monster” commercials on TV and radio in the days leading up to the All-Canada Show.
“The net result is that Manitoba projected an out-sized presence in the local media and at the show that far exceeded the number of lodges and outfitters who exhibited — and we didn’t spend a fortune doing it,” Palmer said.
“Spectators and exhibitors were overheard saying it looked like the ‘All-Manitoba Show,’ Palmer said. “This is really a testament to Manitoba lodges and outfitters working in unison with our organization to promote the industry. It was certainly noticed by operators from competing provinces, who dropped by our booth and said they thought Manitoba’s efforts boosted visitor turnout.”

Jerry Dunlop, of Dunlop’s Fly-In Fishing Lodge, credited the marketing program for helping bring traffic and sales to his Chicago show booth. “I’ve done the Chicago show for four years, and this was by far my best,” he said. “There were new people who had never been to an All-Canada Show. Some mentioned the radio ads.”
Shawn Gurke, whose family owns and operates Nueltin Fly-In Lodges in northern Manitoba, said, “For the first time, as long as I’ve been in this business, I’m encouraged by the efforts of Travel Manitoba. They are creating visibility for the best that Manitoba has to offer.” He added, “One of my regular customers came by my booth and said he saw me on TV.”