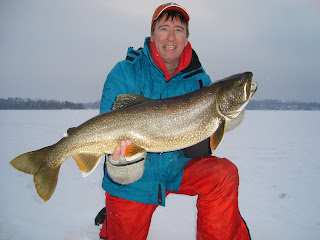 The snow on the lake was soft, powdery and extremely deep making the snow machine struggle to keep up speed with a heavy load of ice fishing equipment in the sleigh behind. With the break in the cold weather and a forecast of rain in the near future we knew that we only had a small window of opportunity to chase some Northwestern Ontario lake trout. After a twenty minutes ride down a narrow back trail we had arrived at one of the hundreds of lakes that dot the landscape between Kenora and Vermillion Bay. I had spent a fair amount of open water on this particular lake, one that boasted not only big lake trout but bass, walleye and a few large pike. Our first stop was to a small island next to the main lake, a place with a cliff like drop that went from six to fifty metres in a very short span. It was such a sharp drop in fact that our fish locators had a tough time registering bottom, half of our sonar cone bouncing off the side of this sheer rock face. After drilling half a dozen holes, we started working the water column from bottom to top with a variety of heavy spoons and jigs. Fifteen minutes after arrival, I had the first hit, a small tap on a rapid retrieve to the surface. Dropping back down to about the twenty metre level, I jigged my Swedish pimple in the zone where I had the hit. Sure enough the trout came back. Rolling and head shaking like only a lake trout can, I eased him toward the surface. Friend Steven Wintemute was waiting beside the hole, making sure to take the transducer out of the ice hole to avoid tangling. Unfortunately for me the fish shook the hook just below the hole. Encouraged, we renewed our angling efforts with increased concentration. Ten minutes later Steven hooked into another fish and judging by the bend in his rod, I knew this was a smaller fish. Still, a short time later we had our first laker on the ice. After an hour with only one more bite we headed south to a narrowed down section between two parts of the lake. This time our holes were in slightly shallower water but the pattern was the same, we were against a granite wall, a place in which hungry lake trout hunted ciscoes. Steven had the first fish in no time, a big solid lake trout that hit his white tube jig ten metres below the hole. I rushed into his portable tent, just in time to the see the tube drop out of the fish’s mouth below the hole. One of the neat parts about fishing on a lake like this is the water clarity- you could still see your lure ten metres down.
I hurried back out of the tent to my hole, figuring if there was one good fish around, there could be more. Sure enough on my very next drop with a glow and chartreuse Lindy Flyer jig tipped with a two inch Berkley Gulp smelt I had a fish almost rip the rod out of my hand with the strike. This was no small fish, my rod bent over almost to the hole. Five minutes later I had made little progress, the laker rolling and bulldogging to shake the hook. Gradually gaining line, I could see that I had the fish now up to the twenty five metre depth range on my Humminbird Ice 55.
It had been twenty years since my last visit to this lake and it might be another ten until I come back but the memories of this day and others will last a lifetime. These kinds of experiences are out there, a myriad of lakes to choose from with nobody around but you and the ravens.